The temperature on Phobos
May 9, 2019 at 3:04 pm Robert Zimmerman Points of Information 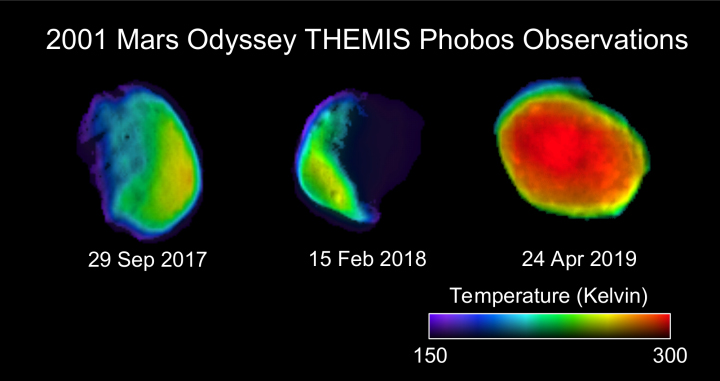 The Mars Odyssey science team today released false color images of the Martian Moon Phobos showing the temperature range that the spacecraft has detected, shown above in a reduced form.

The April 24, 2019 image is the first time Mars Odyssey had gotten a full moon look at the Moon. Not surprisingly, the hottest spots on the surface are at the center, at noon, with it getting cooler as one gets to the outer edges near dawn and dusk and at the poles.

Curiosity films partial solar eclipses by both Phobos and Deimos
April 4, 2019 at 10:15 am Robert Zimmerman Points of Information

Last week Curiosity successfully captured partial solar eclipses by both Phobos and Deimos as the Martian moons crossed the face of the Sun.

The movie on the right shows Phobos eclipsing the Sun. The speed is ten times faster than real time.

The press release can be seen here. It notes how these observations, of which 8 in total have been made since Curiosity arrived on Mars, have helped pin down the orbits of both moons.

Escape velocity on Phobos changes a lot depending on location
November 16, 2018 at 9:34 am Robert Zimmerman Points of Information

A new computer analysis of the shape of the gravitational field of the Martian moon Phobos suggests that the escape velocity varies significantly, depending on where you are on the moon’s surface.

Phobos is an odd duck among our solar system’s moons. It’s tiny (a fraction of a percent the size of our own moon) and is shaped like a potato; that weird shape draws gravity to different places, depending on where you are.

All these features make Phobos a challenge to travel on, researchers report in Advances in Space Research. In some places, moving any faster than 5 kilometers per hour would be enough to free you from the moon’s meager gravitational pull, sending you off into space where you’d likely be captured by Mars’s gravity and end up orbiting the Red Planet. The fastest you could travel anywhere on Phobos would be about 36 kilometers per hour, or a little faster than a golf cart, the team finds.

Obviously, this must be recognized for any mission trying to land and explore the moon.

Since Odyssey began orbiting the Red Planet in 2001, THEMIS has provided compositional and thermal-properties information from all over Mars, but never before imaged either Martian moon. The Sept. 29 observation was completed to validate that the spacecraft could safely do so, as the start of a possible series of observations of Phobos and Deimos in coming months.

In normal operating mode, Odyssey keeps the THEMIS camera pointed straight down as the spacecraft orbits Mars. In 2014, the spacecraft team at Lockheed Martin Space Systems, Denver; and NASA’s Jet Propulsion Laboratory, Pasadena, California; and the THEMIS team at Arizona State University, Tempe, developed procedures to rotate the spacecraft for upward-looking imaging of a comet passing near Mars. The teams have adapted those procedures for imaging the Martian moons.

The data from this particular observation is less significant than the fact that the spacecraft can now do it. Expect some new results about the Martian moons in the coming months.

Hubble shoots movie of Phobos
July 20, 2017 at 10:34 am Robert Zimmerman Points of Information

Cool image time! By taking a quick series of thirteen images, the Hubble Space Telescope was able to shoot a short movie of the rotation of Phobos above the surface of Mars. The gif animation on the right is the smaller of the two animations released today. Be sure and view the full resolution version.

What is even cooler is that movie was apparently unplanned. From the link:

Over the course of 22 minutes, Hubble took 13 separate exposures, allowing astronomers to create a time-lapse video showing the diminutive moon’s orbital path. The Hubble observations were intended to photograph Mars, and the moon’s cameo appearance was a bonus.

In terms of science this movie has a somewhat limited value. In terms of space engineering it is triumph, and once again illustrates the unprecedented value of having an optical telescope in space. Woe to us all when Hubble finally dies, as we have no plans to replace it.

As part of its checkout, Europe’s ExoMars’ Trace Gas Orbiter has taken test images of the Martian moon Phobos.

The camera imaged the moon on 26 November from a distance of 7700 km, during the closest part of the spacecraft’s orbit around Mars. TGO’s elliptical orbit currently takes it to within 230–310 km of the surface at its closest point and around 98 000 km at its furthest every 4.2 days. A colour composite has been created from several individual images taken through several filters. The camera’s filters are optimised to reveal differences in mineralogical composition, seen as ‘bluer’ or ‘redder’ colours in the processed image. An anaglyph created from a stereo pair of images captured is also presented, and can be viewed using red–blue 3D glasses.

The images were done to test the spacecraft’s operation, and have apparently shown that it is functioning well.

Phobos is being pulled apart
November 11, 2015 at 12:14 am Robert Zimmerman Points of Information

A new computer model suggests that the grooves on Phobos are caused by tidal forces that are slowly pulling the Martian moon apart.

Don’t panic, however. The data suggests that the moon won’t come apart for at least 30 million years.

Analysis of the data will allow scientists to better estimate the mass of the Martian moon, which in turn will tell us a great deal about its make-up.

And no, there is no evidence the spacecraft was attacked by the Phobosians. But then, this is not a Russian spacecraft.

Mars Express will do an extremely close flyby of the martian moon Phobos on December 29.
December 24, 2013 at 9:21 am Robert Zimmerman Points of Information

Mars Express will do an extremely close flyby of the martian moon Phobos on December 29.

Late this month, ESA’s Mars Express will make the closest flyby yet of the Red Planet’s largest moon Phobos, skimming past at only 45 km [28 miles] above its surface. The flyby on 29 December will be so close and fast that Mars Express will not be able to take any images, but instead it will yield the most accurate details yet of the moon’s gravitational field and, in turn, provide new details of its internal structure.

Scientists have assembled a movie of one Martian moon eclipsing another, taken from Curiosity.
August 16, 2013 at 1:11 am Robert Zimmerman Points of Information

Scientists have assembled a movie of one Martian moon eclipsing another, taken from Curiosity.

Video below the fold.
END_OF_DOCUMENT_TOKEN_TO_BE_REPLACED

Russia heads for Mars
November 4, 2011 at 11:59 am Robert Zimmerman Points of Information

Russia heads for Mars: a detailed look at the Phobos/Grunt sample return mission, set to launch on November 8.

I really wish the Russians good luck with this project. Not only would it herald their return to planetary science since the fall of the Soviet Union, success here would break their long string of failures to the red planet. Though their unmanned planetary program had some remarkable achievements during the Soviet era, of the 19 missions they flew to Mars in the 1960s, 1970s, and 1980s, all were failures, producing almost no useful data.

Russia’s next attempt to return to Mars is set for a November 9 launch
October 25, 2011 at 10:28 pm Robert Zimmerman Points of Information

Russia’s first attempt in decades to send a probe beyond Earth orbit is now set for a November 9 launch.

Phobos/Grunt is a combined orbiter and lander, and is aimed not at Mars but at the Martian moon Phobos.