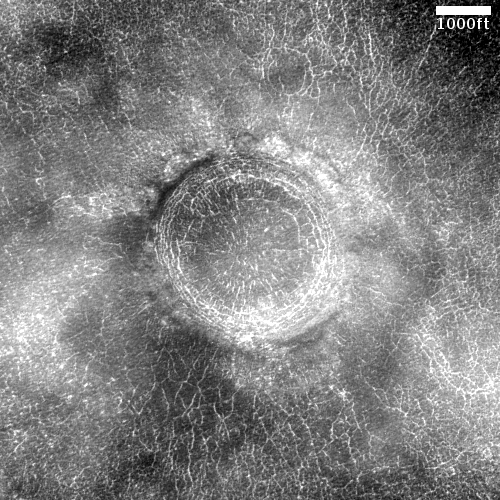 Cool image time! The photo to the right, cropped to post here, was taken on May 3, 2021 by the high resolution camera on Mars Reconnaissance Orbiter (MRO). It shows a remarkably fractured crater that lies only a few miles to the southeast of where the now-inactive Phoenix lander put down back in 2008, at the very high latitude of 69 degrees north.

Phoenix was purposely sent to this high latitude to find out what the ground and atmosphere was like there. It found the following:

Phoenix’s preliminary science accomplishments advance the goal of studying whether the Martian arctic environment has ever been favorable for microbes. Additional findings include documenting a mildly alkaline soil environment unlike any found by earlier Mars missions; finding small concentrations of salts that could be nutrients for life; discovering perchlorate salt, which has implications for ice and soil properties; and finding calcium carbonate, a marker of effects of liquid water.

Phoenix findings also support the goal of learning the history of water on Mars. These findings include excavating soil above the ice table, revealing at least two distinct types of ice deposits; observing snow descending from clouds; providing a mission-long weather record, with data on temperature, pressure, humidity and wind; observations of haze, clouds, frost and whirlwinds; and coordinating with NASA’s Mars Reconnaissance Orbiter to perform simultaneous ground and orbital observations of Martian weather.

Below is an overview map showing the location of both this crater and the Phoenix lander.
END_OF_DOCUMENT_TOKEN_TO_BE_REPLACED

The head of Roscosmos said today that they are pushing to accelerate the development of a new rocket, dubbed Phoenix, that will reduce launch costs by 20%, lowering the launch price per launch to $55 million.

I have been reading stories like this, about a new wonderful Russian rocket or spacecraft, for decades. First there was Clipper. Then there was Angara, repeatedly. Recently they have been talking up a new manned capsule and cargo ship. Along the way were a number of other forgotten proposals that would revolutionize space travel. None of these proposals however have ever seen the light of day, though Angara has completed two test flights.

In the past, Russia was not under any competitive pressure. They could undercut the launch price of every other rocket company in the world, without doing anything. Now, they face stiff competition that is only going to get stiffer. They need to produce, or they will be out of the game entirely.

The big question is whether they can, as a nationalized space industry run by a government that is rampant with corruption.

Hiring lifeguards who can’t swim in the name of diversity.
April 5, 2013 10:01 am Robert Zimmerman

Hiring lifeguards who can’t swim in the name of diversity.

A Phoenix man has been jailed for hold Bible study sessions in his own home.
July 6, 2012 3:13 pm Robert Zimmerman

This is freedom? A Phoenix man has been jailed for holding private Bible study sessions in his own home.

Salman is the owner of Mighty Mike’s Burgers — and he is also an ordained pastor. He and his wife have been hosting Bible studies on their 4.6 acre property since 2005. The gatherings were originally attended by as many as 15 people.

Wow! As many as fifteen people! The mind boggles. Just imagine the traffic problems these mobs must have caused, especially as they gathered on a plot of land as small as 4.6 acres!