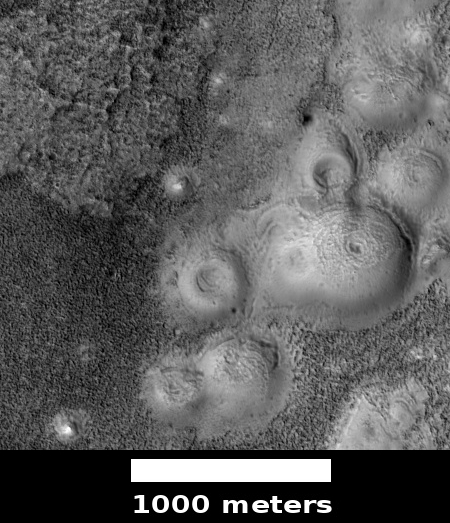 Most people are very aware of Mars’ giant volcanoes. This week the science team for Mars Reconnaissance Orbiter (MRO) decided to highlight instead a location on Mars filled with relatively tiny volcanoes. The image on the right is only one small section from the full image, and shows some of these pitted cones, as well the strange nearby badlands. From their caption:

The origins of these pitted mounds or cratered cones are uncertain. They could be the result of the interaction of lava and water, or perhaps formed from the eruption of hot mud originating from beneath the surface.

These features are very interesting to scientists who study Mars, especially to those involved in the ExoMars Trace Gas Orbiter mission. If these mounds are indeed mud–related, they may be one of the long sought after sources for transient methane on Mars.

The age of these pitted cones is not known. They might be still active, or have sat on Mars unchanged for eons. 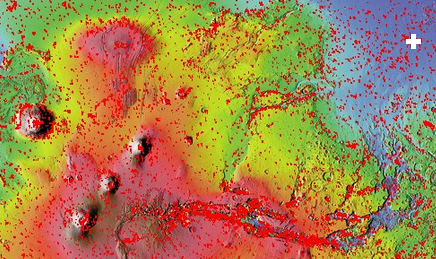 As always, context is crucial for gaining a better understanding of what we are looking at. The map on the right shows that these particular cones, indicated by the white cross, are located in an area of those plains dubbed Chryse Planitia, part of the vast northern plains of Mars, an area where some scientists think an intermittent ocean might have once existed. As you can see, this is also the region that took most of the apparent drainage running off the slopes of the planet’s giant volcanoes.

Nor are these cones unique in this region. MRO has taken a good scattering of images at this general location (41 degrees north, 332 degrees east), and throughout the surrounding terrain are many more of these pitted cones.

If these cones are a source of the transient methane on Mars, then the Trace Gas Orbiter should eventually see a concentration of methane above them. This would not prove them to be the source, but it would make them a much more intriguing target for a later rover mission.