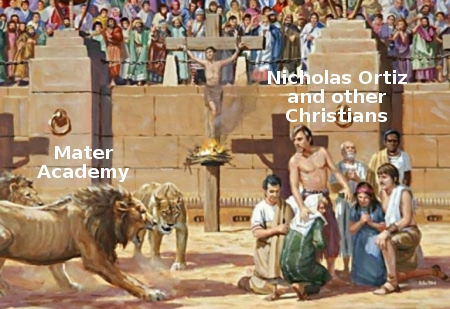 How Mater Academy treats the Christian children under its care.

They’re coming for you next: Nicholas Ortiz, then a 14-year-old Christian freshman at the high school level of Florida’s charter school Mater Academy, has sued the school for allowing both students and teachers to slander, harass, and discriminate against him for his religious beliefs, and then punishing him when he reported the abuse to school officials.

Ortiz said he regularly brings his bible to school to read, which he alleges has made him a target for “disparaging comments” from other students, as well as school staff and administrators.

The complaint also outlines what it calls false and defamatory statements that circulated among students claiming Ortiz was planning a school shooting. Screenshots of communications between students show them discussing the rumored shooting and details their plans to physically assault Ortiz as a result.

Due to the shooting allegations, Ortiz was given the maximum allowed punishment of a 10-day suspension.

“Nicholas repeatedly made the school aware of a pattern of pervasive bullying by his fellow students, bullying that was reinforced by the words and actions of the school,” the complaint added. “Yet, the school did not just sweep Nicholas’s bullying claims under the rug — failing to report them as required under the law — they retaliated against Nicholas for reporting the harassment.”

You can read his complaint here [pdf].

Though the whole behavior of the school and its students is intolerant and disgusting, this event — which probably began the persecution — is probably the most egregious:
END_OF_DOCUMENT_TOKEN_TO_BE_REPLACED