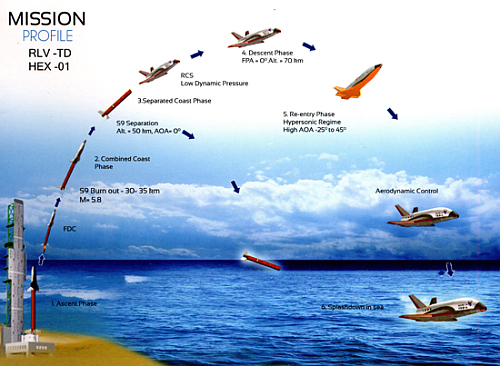 According to S. Somanth, the head of India’s space agency ISRO, it will attempt the first flight on January 28, 2023 of a prototype reusable launch vehicle, similar to the Space Force’s X-37B.

According to ISRO’s website, Saturday’s landing demonstration will involve a “landing experiment (LEX)” in which the RLV will be carried using a helicopter to an altitude of 3-5 km and released at approximately 4-5 km from the runway with a horizontal velocity.

After the release, the RLV glides and navigates toward the runway, and carries out a conventional autonomous landing. This is planned in a defence airfield near Chitradurga in Karnataka.

The graphic to the right shows the flight profile of earlier tests that landed in the ocean. If this runway test is successful, it appears ISRO will next attempt an orbital flight and return.

India’s space agency ISRO is now preparing for the first drop test of its own home-built version of an X-37B mini-shuttle, designed to remain in orbit for a period of time, return to Earth on a runway, and then be reused.

According to ISRO officials, the RLV [Reusable Launch Vehicle] wing body will be carried using a helicopter to an altitude of three to five km and released at a distance of about four to five km ahead of the runway with a horizontal velocity. After the release, the RLV will glide, navigate towards the runway and land autonomously with a landing gear in the defence airfield near Chitradurga.

A prototype of the RLV was flown on a suborbital test flight in 2016, landing in the ocean. The pending test would be the first to attempt a runway landing, essential if the spacecraft is to safely return to Earth and then be reused.

India to test reusable mini-shuttle in May
April 6, 2016 8:56 am Robert Zimmerman

The competition heats up: ISRO, India’s space agency, this week announced plans to conduct its first test flight of its half-scale prototype reusable launch vehicle in May.

The RLV, is a scaled-down prototype (some 21.3 feet in length or 6.5 meters) of a future uncrewed single-stage reusable spaceplane, known as Avatar, that is being designed by the ISRO. The May mission will be a technology demonstrator (RLV-TD) to test powered cruise flight, autonomous landing and hypersonic flight using an air-breathing propulsion system. The spacecraft, which resembles a small winged aircraft, will be launched from the first launchpad of the Satish Dhawan Space Centre to an altitude of 43 miles (70 km) atop a two-stage Rohini sounding rocket and then released. It will re-enter the atmosphere and travel back to Earth in a controlled descent, to be recovered from the Bay of Bengal. [emphasis mine]

This vehicle is kind of Inida’s version of the Air Force’s X-37B, except that it is also testing a hypersonic scramjet engine, a cutting edge design that the U.S. has barely been able to fly successfully. Should they succeed, it will place them smack dab in the middle of the elite club of space-faring nations.

The competition heats up: The first test flight of India’s prototype scaled-down version of a reusable spaceplane is expected by late July or early August at the latest.

It appears the Modi government is accelerating development of this mini-shuttle, which is essentially India’s version of Sierra Nevada’s Dream Chaser. If they build it first, it will mean they will have the chance to grab the business that Sierra Nevada has been hoping to grab.