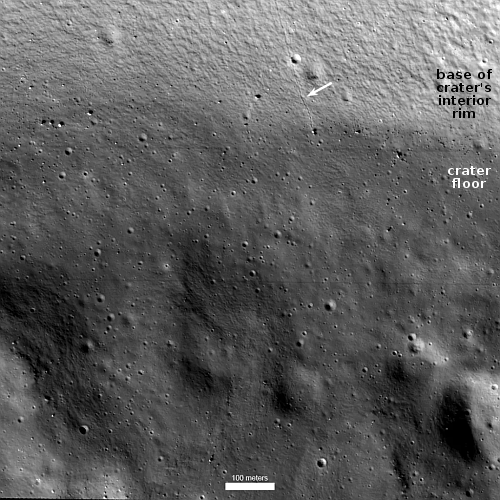 Using ShadowCam, a NASA-funded camera designed to take high resolution images of the permanently shadowed regions on the Moon, scientists have snapped the first picture of shadowed floor of Shackleton crater.

That image, reduced to post here, is to the right. I have added some labels to clarify what we are seeing. The arrow points to a boulder track caused when the boulder rolled down the crater rim slope.

The camera will be used to image the moon’s permanently shadowed regions with a resolution of better than 6.6 feet (2 meters) per pixel

ShadowCam is one of six instruments on the South Korean lunar orbiter, Danuri, which is now in lunar orbit and beginning its science phase. This was therefore only a successful test image to make sure the camera was working as planned.

Though the area photographed was in shadow (otherwise it would have saturated ShadowCam’s sensitive camera), this first image appears to show no ice at the base of the crater. This simply could be that this part of the crater floor is not permanently shadowed, but gets illuminated enough to melt off any ice. Or it could be that no ice exists in these places. We need to wait and see.