The strange flows in Shalbatana Vallis on Mars
May 27, 2021 1:47 pm Robert Zimmerman 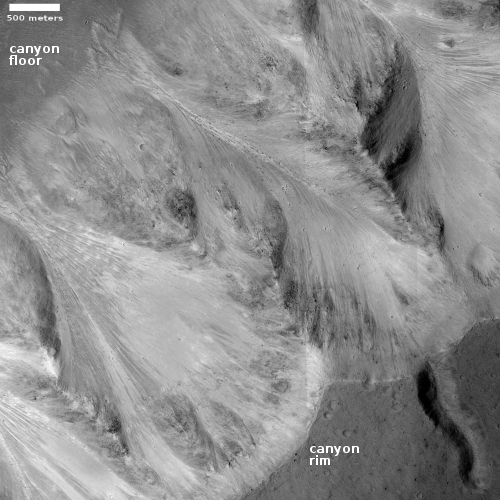 Cool image time! The photo to the right, rotated, cropped, and reduced to post here, was taken by the high resolution camera on Mars Reconnaissance Orbiter (MRO) on March 31, 2021, and shows a series of very distinct arrowhead-shaped sloping ridges interspersed with hollows flowing down from the southern cliff face of Shalbatana Vallis, one of the larger long meandering drainages flowing into the northern lowlands of Chryse Planitia and north of Valles Marineris.

This location is at 5 degrees north latitude, so nothing we see in the picture is likely glacial or evidence of ice.

So what are we looking at? My guess is that the parallel ridges show us a hint of the original slope of alluvial fill. In the past canyon’s south rim or cliff either did not exist, or was much smaller. Instead the ground mostly sloped gently downhill from the plateau to the canyon floor.

Scientists believe that in the far past catastrophic floods of water flowed through Shalbatana. If a massive flood of water off that rim came down that slope of alluvial fill, it could have pushed into that fill and created the hollows, washing the fill down into the canyon floor and leaving behind the ridges in between.

The overview maps below provide the geographical context.
END_OF_DOCUMENT_TOKEN_TO_BE_REPLACED