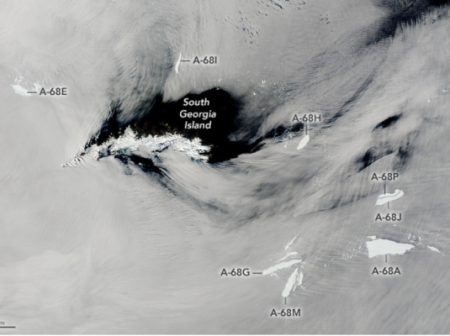 As should have been expected, the giant iceberg the size of Delaware that had broken from the Antarctic ice pack in 2017 and was drifting directly towards South Georgia Island (a wildlife preserve), is now breaking up without doing any harm to the island itself.

Seawater has been cutting like a knife through A-68A, the enormous Antarctic iceberg drifting in the southern Atlantic Ocean. On January 11, 2021, the Visible Infrared Imaging Radiometer Suite (VIIRS) on the NOAA-20 satellite acquired this image showing the remainder of A-68A, along with two large pieces that broke off in December 2020.

The U.S. National Ice Center (USNIC) reported on January 8 that A-68A measured 74 kilometers long and 44 kilometers wide. That equates to an area about twice the size of Houston—still sizable, but quite a bit smaller than its Delaware-sized status in July 2017 when it calved from the Larsen C Ice Shelf. The pieces that broke from A-68A in December (forming A-68D and A-68E) are smaller, but remain large enough to be tracked by the USNIC.

Every report about this, including today’s, waxes eloquently about the terrible threat the iceberg poses to the wildlife on South Georgia Island should it become grounded there, even though all past data, let me repeat, all past data indicated that it would not hit the island but drift around as it broke up.

And, surprise surprise, that is exactly what it has been doing. 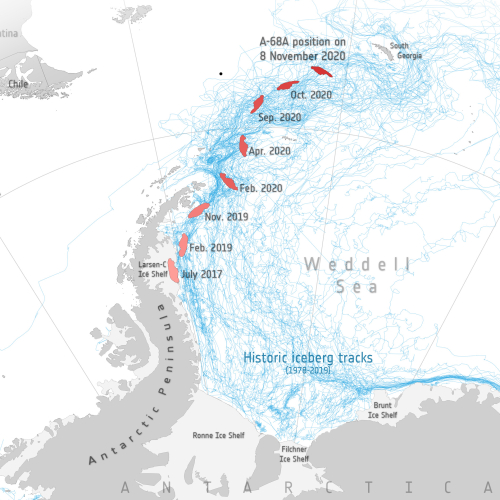 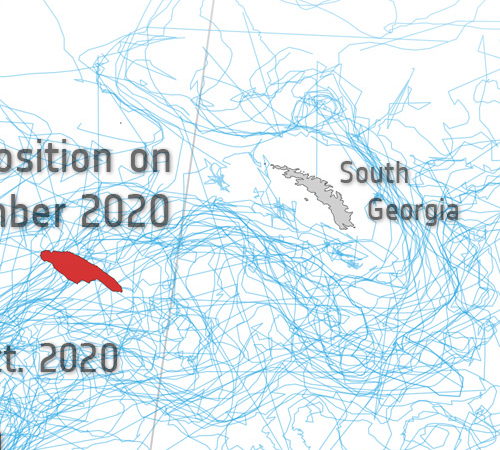 The largest section of a huge iceberg that broke off from Antarctica’s Larson ice shelf in 2017 is now headed directly for a collision with remote South Georgia Island.

The first image to the right shows the iceberg’s movement since 2017. The second zooms in to show that the iceberg and island are almost the exact same size, 100 miles long.

South Georgia Island, 1,000 miles east of South America, has no permanent human inhabitants, though explorers, scientists, and mountain climbers do go there periodically. Instead, it is a wildlife preserve:

Around five million seals call the islands home, as well as 65 million birds of 30 different species. Migrating whales and various fish species populate the surrounding waters and there is a large penguin population.

The first link above, from the European Space Agency (ESA), typically shivers with the modern mindless fear that seems to permeate everything our culture considers:

About the same size as the South Atlantic island, it could ground in the shallow waters offshore and cause real problems for the island wildlife and seafloor-dwelling life. Penguins and seals need access to the sea to feed so the iceberg could easily block their foraging routes and life on the seafloor could be crushed if the berg grounds. The fear is that if the berg does anchor against the South Georgia coast, it could remain there for up to 10 years. When the A38 grounded here in 2004, many dead penguin chicks and seal pups were found along the shoreline.

All maybe true, but then, the arrival of icebergs this large to South Georgia Island while likely rare is also quite normal. The sea life there has had to adapt to these events, or else it would not have survived to today.

Also, note the blue lines. Those are the tracks of past icebergs as recorded from orbit. Not only is it common for icebergs to be aimed at South Georgia Island, the currents appear to guide them around the island once they get close. While this new berg is so huge it might plow into the island anyway, the data here suggests it will not.

Regardless, this somewhat rare event provides scientists a opportunity to learn something about the survival of species in hostile environments. We can’t prevent such things, but we can learn their consequences as well as how life adapts under such conditions.