Link here. It also happens to have been the fourth ever launched, and the second U.S. satellite, Vanguard 1.

Thanks to Kirk for reminding me that Vanguard 1 was not the first U.S. satellite, and was actually the fourth launched, not the second. All I needed to do to avoid the error was read my own Chronological Encyclopedia, but I was too lazy to do that, even though it is on my desk. Duh.

A fascinating look at the space race and what the future held, written in 1959.
June 4, 2012 at 9:01 am Robert Zimmerman Points of Information

A fascinating look at the space race and what the future held, written in 1959.

The article, reprinted by Forbes, is amazingly detailed, optimistic, yet also cool-headed about the future. For example, consider this quote about the future of manned spaceflight:
END_OF_DOCUMENT_TOKEN_TO_BE_REPLACED

A University of Arizona law student has won a trip into space in the Seattle Space Needle’s “Space Race,” beating out 50,000 other contestants.
May 9, 2012 at 7:05 pm Robert Zimmerman Points of Information

A University of Arizona law student has won a trip into space in the Seattle Space Needle’s “Space Race,” beating out 50,000 other contestants.

The 1960s space race: The US orbits its first living animal, Enos the chimpanzee

An evening pause: Fifty years ago today the United States succeeded for the first time in placing a living animal in orbit, four years after the Soviet’s launched the dog Laika into space. On November 29, 1961 NASA orbited a chimpanzee named Enos as a dress rehearsal for John Glenn’s orbital flight, then scheduled for early in 1962. See this article for some details about Enos difficult flight.

Since the flights of Gagarin, Titov, Shepard, and Grissom earlier in 1961, the 1960s space race had seemed in abeyance as NASA geared up for its first orbital manned mission, while the Soviets were typically silent about their plans. Yet, for those like myself who were alive at that time, the suspense never abated. What would happen next? Could the U.S. beat the Russians to the Moon? Only time would tell.

Recognize the significance of space as a field of competition. Beijing is not engaged in a space race with Washington. But China is engaged in a great power competition with the U.S. in which space is one arena. American decision makers should come to terms with this duality. In this regard, the Chinese are unlikely to be manipulated by American proposals on “codes of conduct” or meetings with the head of NASA. As long as Beijing and Washington are in competition, space will be one of the major venues.

And competition is not a bad thing. It is going to be the fuel that gets the human race into space.

An evening pause: Fifty years ago today Soviet cosmonaut Gherman Titov became the second Russian to fly in space, and the first to stay in orbit more than one day. During his seventeen orbit flight he also was the first human to experience space sickness and to sleep in space.

The newsreel below is somewhat comical, as the Soviets were not very forthcoming with information. To provide visuals the newsreel used film footage showing a V2 rocket from World War II, as well as a very unrealistic globe with an equally unrealistic spacecraft to “demonstrate the course of an orbit around the earth.”

Nonetheless, because the newsreel is of that time, it illustrates well the fear the west had of the Soviet’s success in space. For a communist nation to be so far ahead of the U.S., which so far had only flown two suborbital flights, was a challenge to the free world that could not stand. 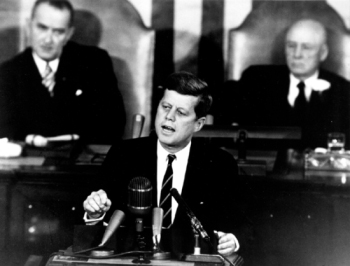 Above all, going to the Moon and exploring space was not his primary goal.

For Kennedy — whose presidential campaign included an aggressive anti-communist stance against the Soviet Union — the months before the speech had not gone well. Five weeks earlier, for instance, the CIA-led attempt to invade Cuba and overthrow Castro’s communist government had ended in total failure. When Kennedy refused to lend direct military support to the Bay of Pigs invasion, the 1,200 man rebel force was quickly overcome. “How could I have been so stupid as to let them go ahead?” Kennedy complained privately to his advisors.

In Berlin, the tensions between the East and the West were continuing to escalate, and would lead in only a few short months to Khrushchev’s decision to build the Berlin Wall, sealing off East Berlin and the citizens of East Germany from the rest of the world.

In the race to beat the Soviets in space, things were going badly as well. NASA had announced the United States’ intention to put the first man into space sometime in the spring of 1961. The agency hoped that this flight would prove that the leader of the capitalist world still dominated the fields of technology, science, and exploration.

Originally scheduled for a March 6, 1961 launch, the short fifteen minute sub-orbital flight was repeatedly delayed. The Mercury capsule’s first test flight in January, with a chimpanzee as test pilot, rose forty miles higher than intended, overshot its landing by a hundred and thirty miles, and when the capsule was recovered three hours later it had begun leaking and was actually sinking. Then in March another test of the Mercury capsule included the premature firing of the escape rocket on top of the capsule, the unplanned release of the backup parachutes during descent, and the discovery of dents on the capsule itself.

These difficulties caused NASA to postpone repeatedly its first manned mission. First the agency rescheduled the launch to late March. Then early April. Then mid-April. And then it was too late.
END_OF_DOCUMENT_TOKEN_TO_BE_REPLACED