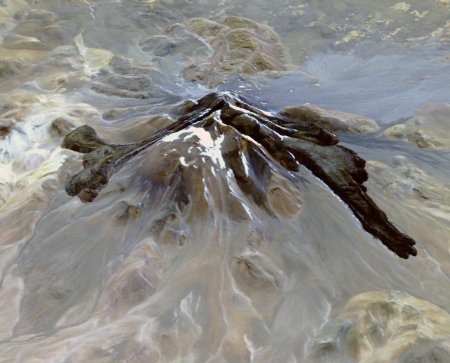 Cool image time! The image on the right, cropped and reduced to post here, shows a volcano not on Mars or the Moon or any of the moons of Jupiter or Saturn, but here on Earth in South America!

Llullaillaco is a stratovolcano at the border of Argentina and Chile. It lies on a high plateau close to the Atacama Desert. At an elevation of 6723 m ASL, it is the second highest active volcano in the world. About 150,000 years ago the volcano’s southeastern flank collapsed, producing a debris avalanche that traveled 25 kilometers. The youngest dated rocks are about 5600 years old; but there are local reports of activity from the 1800s. The perspective image looking east was acquired December 19, 2014.

If you click on the link you can see the full image. It was taken by one of the instruments on the Earth-observation satellite Terra, launched in December 1999. Though the website for this image does not state so, I suspect that some of the colors we see here are false colors, as some of the data comes from the infrared.

New satellite data covering the period from 2000 to 2011 now shows that the atmosphere traps far less heat than predicted by every global warming climate model.
July 31, 2013 10:08 am Robert Zimmerman

The uncertainty of science: New satellite data covering the period from 2000 to 2011 now shows that the atmosphere traps far less heat than predicted by every global warming climate model.

The models had predicted that the increase in CO2 — which is insufficient on its own to cause a greenhouse effect — would cause feedbacks with water (the atmosphere’s real greenhouse gas) that would increase the amount of atmospheric humidity which would thus trap heat in the atmosphere and raise the global temperature. The new data instead shows the opposite. The atmosphere is not trapping any heat. The greenhouse effect is not occurring as predicted.

Video: The world on fire.