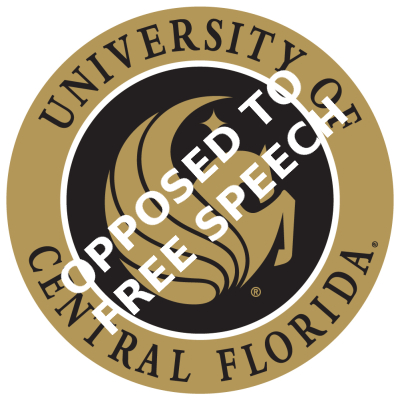 University of Central Florida: Its hostility to free
speech had better change soon!

Bring a gun to a knife fight: In a settlement late last month [pdf] resulting from an April ruling against it by the courts, the University of Central Florida agreed to end its programs and policies designed to censor and even blacklist students who expressed opinions the university did not like.

The lawsuit [pdf] was brought by the legal organization Speech First, a student membership organization which acts to stop colleges from squelching the first amendment rights of students.

UCF officials agreed to pay $35,000 in legal fees, rewrite a harassment policy and discontinued the bias response team in a settlement with Speech First.

…The settlement “led to the elimination of UCF’s Stasi-like bias response team and ensured that the university’s policies actually consider the fundamental rights of their students,” Cherise Trump, the group’s executive director, wrote in a news release [pdf]. “Our win in the Eleventh Circuit not only set precedent in all of Florida, Alabama, and Georgia, but it also guarantees that universities recognize that the law is not on their side when they want to violate their students’ rights and shut down dissenting ideas.”

Pushback: Professor fired for having opinions wins total victory
May 23, 2022 11:59 am Robert Zimmerman

Bring a gun to a knife fight: In January 2021 (in one of my first blacklist columns and just after Biden assumed power), I described how professor Charles Negy was fired from the teaching job he had had at the University of Central Florida for 22 years, merely because he had stated some obvious facts about BLM and affirmative action on his twitter feed.

The school claimed it did not fire him for these tweets (an obvious lie based on the events), but because of a supposed pattern of inappropriate classroom behavior obtained through anonymous tips, tips instigated by Negy’s tweets that by the way did not match any of the school’s previous assessments of his teaching.

Negy fought back, demanding his case be reviewed by an independent arbitrator, and has now won his case.

In the ruling on Monday, the arbitrator, Ben Falcigno, found that the university had failed to show “just cause” when it fired Dr. Negy because it had not given him a chance to change his conduct in the classroom or, alternatively, to show that he was incapable of changing his behavior.
END_OF_DOCUMENT_TOKEN_TO_BE_REPLACED