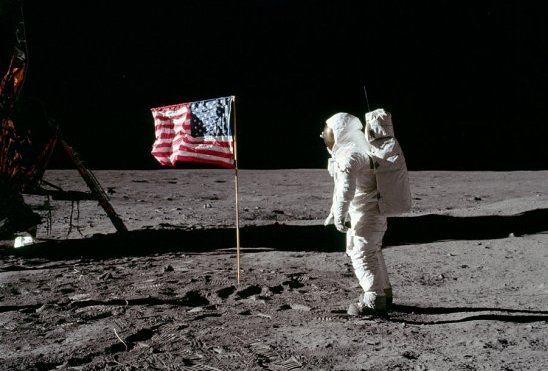 It might actually be possible to see this, though the photos at this time remain unclear and quite blurry.

When the United States sent its Lunar Reconnaissance Orbiter (LRO) to the Moon last year, one of the first targets of its camera was an up close look at the Apollo 11 landing site. Those images, including a detailed description and an annotated image, can be found at the LRO website. Below is my own version, pulled from the original data and marked with my own annotations. I have also increased the contrast slightly from the images on the LRO site to bring out a little more detail. 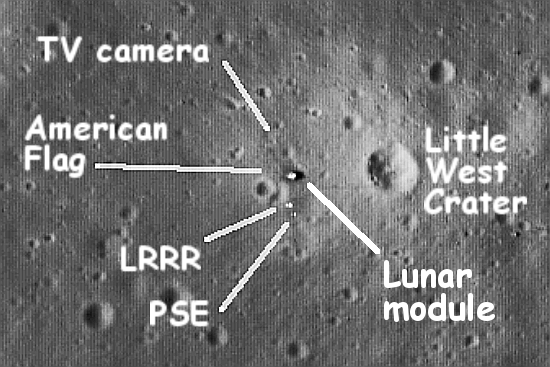 If you look closely at the location where the American flag should be, you can see a tiny horizontal smudge. Is this the flag lying on the ground? I wonder. It would be very interesting to see what a higher resolution image would show us. (Another LRO image here is also inconclusive.) LRO might be able to take a better image, but I’m not sure its camera is capable of resolving this kind of detail. If not, we will probably have to wait until the next manned missions return to the Moon to find out the actual state of the American flag at Tranquility Base.

Sadly, it appears right now that the next manned lunar mission is probably not going to be an American mission. Though the exact outline of NASA’s future remains as yet unclear, President Obama has rejected the Moon as a future destination, and Congress appears willing to accept this decision.

Instead, either a Chinese, Indian, or Russian astronaut is likely going to be the next human to stroll onto Tranquility Base, taking pictures and souvenirs. All three nations have expressed a determination to get to the Moon. All three have also demonstrated in recent years the technological know-how for making it happen.

When they arrive at Tranquility Base and see that flag on the ground, what will they do? I expect that they will likely leave it where they find it, photographing its sad state with a certain joyous glee. For they will be standing there over it, while we will be stuck here on Earth, unable to do anything about it.

As an American, I don’t like this prospect at all. It seems to me that the political decision to abandon the Moon is foolish and short-sighted. Though I completely support the idea of sending astronauts out to explore the asteroids, I see no reason to exclude the Moon in that journey.

Eventually we are going to want to build colonies on Mars. To make that happen, we will first need to figure out how to build spaceships capable of keeping humans alive in space for long periods of time. Thus, Obama’s proposal to go to the asteroids as well as do long term research on the International Space Station is precisely the right approach for gaining this type of engineering knowledge.

However, these things can teach us little about building a human settlement on another world. To gain this knowledge, we need to also build some test colonies. And what better place to do that but on the Moon?

In the final analysis, what I really want is for my own country to be the first to send its astronauts everywhere, not just to the asteroids but back to Tranquility Base as well. And what I also want is for those next American lunar explorers to see that fallen flag at Tranquility Base and to immediately set it upright again, for all to see.

By doing so, we will be declaring unequivocally to all that the United States and its free citizens are here to participate in as well as shape the future. We will be saying, without hesitation or fear, that “Here we stand, here we will stay, and from here we will go forward, for all time. Come with us!”