A photo tour of Vandenberg Air Force Base

Yesterday, as part of my visit to Vandenberg Air Force Base to give a space history lecture to the local section of the American Institute of Aeronautics and Astronautics, I was given a short tour of these west coast launch facilities. While Kennedy is used for launches that circle the equator, Vandenberg, with its southern-facing coast, launches rockets that head south over the ocean for a polar orbit.

We only had time to go inside one launchpad, where unfortunately I was not permitted to take pictures. However, the images I did get will give you a reasonable sense of the layout for this spaceport, which is increasingly becoming a spaceport for private launch companies like ULA and SpaceX. Though the bulk of business for both companies here might be military and government payloads, the future is still going to include a lot of private payloads. The images also help to highlight the differences between these two companies, as well as some past history, as one of these launchpads was once intended for the space shuttle, though never used for that purpose. 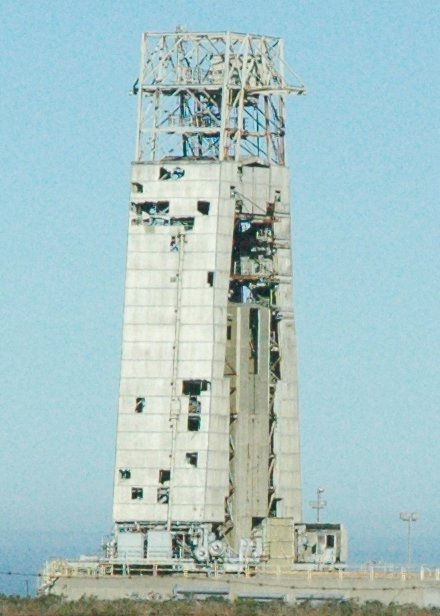 Before we took a look at the active ULA and SpaceX launch facilities, Steve Tullino took me to see some older and now abandoned launch complexes in the base’s northern areas. The image on the right was the launchpad used for a very early version of the Atlas 5 rocket, called the Atlas A. The pad itself hasn’t been used for decades, as you can see by the panels that have fallen off the side of the structure. Still, it is cheaper to leave it standing than to bulldoze it down. Eventually, if the launch business grows, this location could come back to life, and when it does, the company that leases it will either use what is there or tear it down to build their own launch facilities.

Steve noted that to him it would be a shame to see this launch tower bulldozed, but I pointed out that I’d much rather we had a vibrant working launchpad than another memorial to past achievements. The present American culture seems too eager to memorialize the past with monuments, rather than celebrate the future with new achievements. We have plenty of memorials. I instead want some new rockets heading skyward.

Steve next took me past an Orbital ATK launch site that was used for Orbital’s Taurus rocket. 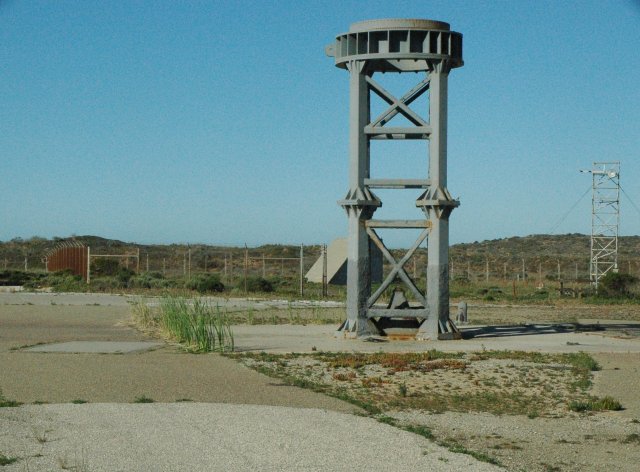 Not much was left here. It was my understanding that Orbital still leases the site, but since the failures during the last two Taurus launches, where the rocket shroud failed to come off the payload and NASA lost its science satellites, Orbital has pretty much shut down the Taurus assembly line. Don’t expect the Taurus to take off from here anytime ever. Right now all that was left was some miscellaneous structures surrounded by a chain-link fence.

We next headed south toward space launch complex 6 (SLC-6, which the Air Force pronounces as “slick-six”), where ULA and SpaceX have the bulk of their facilities. On the way we were joined by Steve’s wife Jessica (who works as one of ULA’s launchpad engineers).

The image above is looking down the coast to the south at these companies’ launchpads, which also happen to be the most active launch complexes at Vandenberg. Beyond the mountains the coast actually turns to the east so that any rocket launch from these pads heading south ends up out over the ocean.

The first pad we passed was the ULA/Atlas 5 pad. 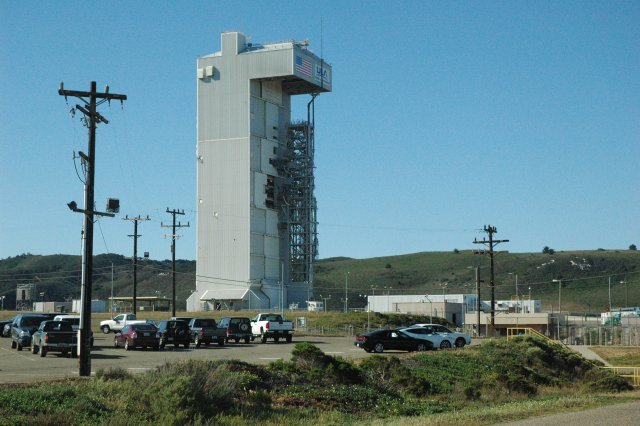 The pad had paved parking lots and office buildings. It was very nicely laid out with very sophisticated facilities. The tower structure in the center is actually made of two sections. The building-like section carries platforms that surround the rocket during its assembly, which for the Atlas 5 takes place vertically. This building actually rolls back away, leaving behind the rocket and the exposed girder section that holds the various electrical and fuel connections that remained in contact until launch. 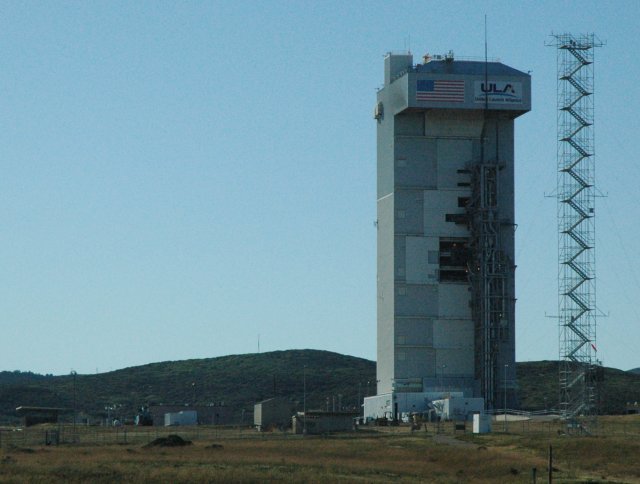 The same tower from another angle. The spindly tower to the right is actually a weather tower, with sensors at its top to measure wind and temperature. Since Vandenberg is on the coast, wind can be a problem for launches, so it is necessary to track that wind above the ground at the same elevation as the top of the rocket.

Next we moved south to the SpaceX launch complex.

I would have loved a tour of this facility, but for proprietary reasons such tours are not easy to get. The image above shows the rocket assembly building on the left, where the Falcon 9 rocket and its payloads are assembled horizontally. In the middle is the strongback on which the rocket rides and on which the rocket is lifted into a vertical position for launch.

This image is looking through the chainlink fence at the SpaceX facility gate. The building is on the left out of view. In the distance is the strongback within the inset box. Below is a close-up of that inset: 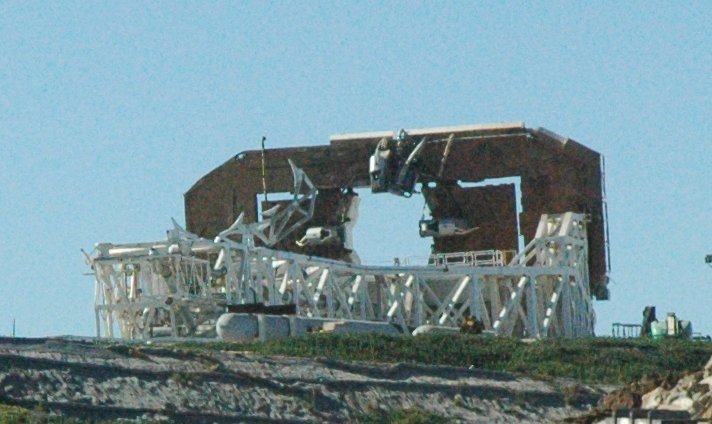 The upright black frame is the base to which the rocket is clamped. When a rocket is on this strongback its nose would be closest to us, and when the strongback tilts up that black frame base would tilt down until it is parallel with the ground and the white girder section, and rocket, are vertical.

I do want to comment on the wider shots above. Note all the stuff piled up hap-hazardly on either side of the road. It reminds me of a back-country house with multiple partly assembled cars and equipment scattered about in the front yard. SpaceX very clearly does not waste much effort on maintaining a pretty and tidy launchpad. Moreover, as far as I could tell, their staffing here was very very minimal. I did not see anyone, though there might have been some people in the building. Since there was no rocket at present to prepare, they apparently kept their staffing as low as possible.

All in all, the impression from this quick superficial look was that SpaceX’s focus was simplicity and getting the job done.

Finally Steve and Jessica took me over to ULA’s Delta launchpad. 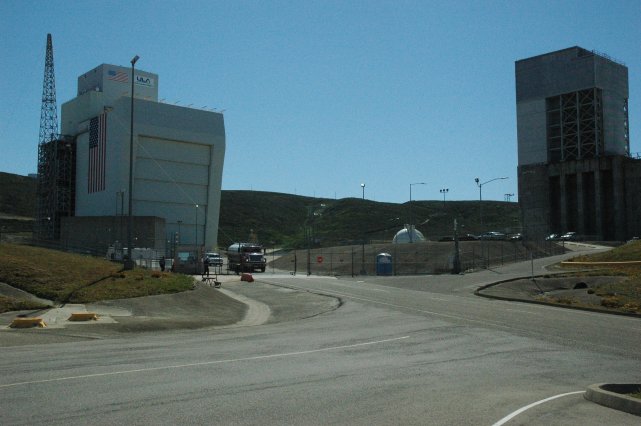 Most of the structures on this pad were originally built for the space shuttle, though the shuttle never launched from here. Since then ULA has leased it and reconfigured it for the larger versions of their Delta family of rockets. The building on the left is, like the previous ULA launchpad above, essentially a collection of access platforms which rolls away when time comes for the launch. In this case, however, the building splits, with one section rolling backwards and another section rolling forward, leaving behind the rocket and a single smaller tower holding electrical and fuel connections, part of which is visible against the building’s left wall.

The building on the right is a vertical assembly building. While the Delta rocket is assembled horizontally (like Falcon 9) in a building out of sight on the left, some National Reconnaissance Office payloads must be assembled vertically. They also must be assembled in a secure facility. This is what this building is for. It was originally designed in this manner for the shuttle. 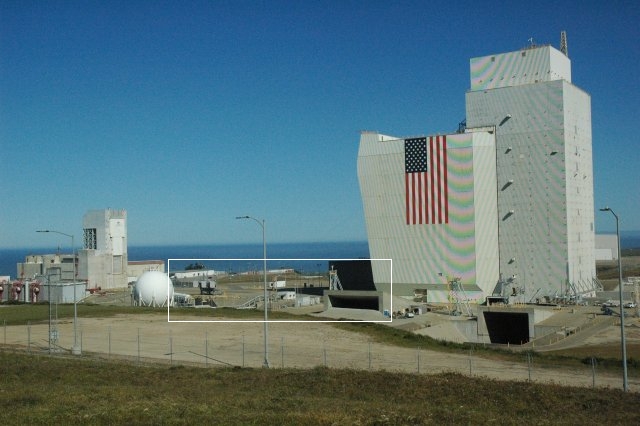 Another view, from above on the opposite side. The white boxed area is what is shown in the zoom in below. It is hard to see, but like the first ULA launchpad, this one was also very neat and very carefully maintained. Unlike SpaceX, ULA has had plenty of cash to keep things tidy.

My impression also was that they had a lot of staff on hand. This was partly because they were in the process of assembling a Delta for launch in August, but I still sensed that they maintained a larger continuous staff, even if no rockets were present for assembly.

Steve and Jessica then took me inside this facility. Sadly, I was not allowed to bring my camera. I can sum up the experience however in one word: Big! The interior space was incredibly large, so large they have repeated problems chasing birds and raccoons from within it. When we took the elevator to the 20th level, almost the highest point inside, the room echoed with the sounds of birds whistling away. I wonder how they react when a rocket takes off.

One final picture of the Delta launch site to show some history: 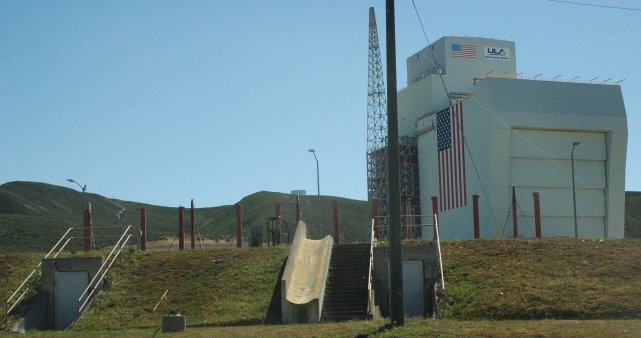 This image shows the main launchpad on the right. In the foreground you can see a series of posts. Closer is a slide down to two doors which appear to enter an underground bunker. This set up is what’s left of NASA’s silly effort to make believe it would be possible for astronauts to escape a shuttle that was exploding on the launchpad. The astronauts would supposedly jump out of the shuttle, grab zip lines that ran down to the posts, land and quickly run or slide down and enter the bunkers.

A similar system was built at Kennedy. Neither was ever needed, but had they been, I doubt they would have made a bit of difference. This contraption was mostly built as a cover-your-ass effort by NASA to quell criticism by elected officials and hostile journalists.

Overall this was a fascinating visit. Thank you Steve and Jessica. I would love to be there once during a launch. It would be quite spectacular up close.