An empty Biden inauguration for a false victory 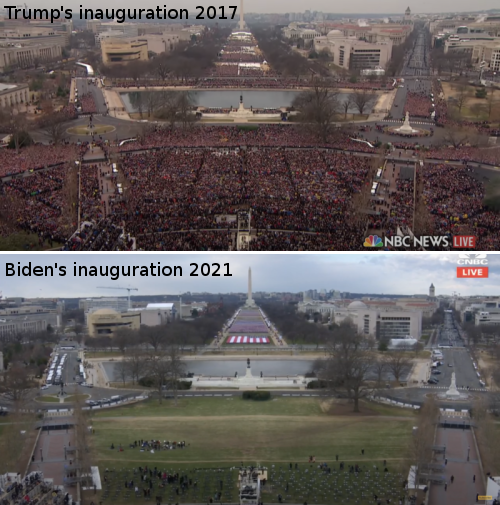 For those who still think Joe Biden won his election legitimately and with popular support, you need only look at the two screen captures to the right, comparing the crowds at the previous presidential inauguration (at the top) and the crowd today at Biden’s inauguration.

It is also important to note that the Trump crowd in 2017 was totally normal, comparable to every past public inauguration since such events became occasions of grand splendor.

For Democrat Joe Biden, however, the lack of a crowd is essentially unprecedented. While past inaugurations were greeted with large enthusiastic crowds of citizens coming to celebrate the democratic and peaceful transition of power, today’s event was heralded by wartime security, barbed wire fences, military checkpoints, and a military police guard of 25,000 troops. Biden officials claimed this tight security was necessary because of the threat of violence.

I ask however: If 80 million voters swarmed the polls on November 3rd to elect Joe Biden, why does his new administration feel so afraid of the American people? No president in the past was this terrified of taking his oath of office in front of a gigantic crowd. Even Abraham Lincoln did so before a huge crowd in 1865, even as the Civil War still raged, as the photo below shows most emphatically. 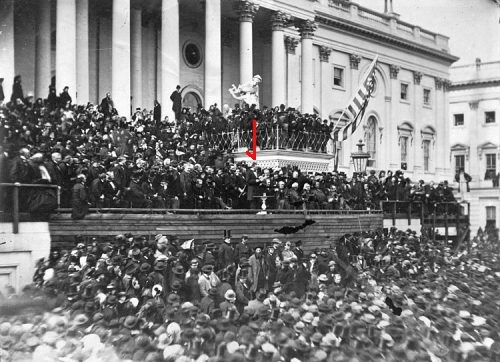 No, the inauguration of Joe Biden is something quite different than any past American transition of power. It comes surrounded by numerous allegations of election tampering and vote count fraud. A vast part of the population — quite likely the majority of the country — strongly believes the election was stolen, a belief that has been reinforced by the aggressive resistance of election boards and Democrats to investigate those allegations. That resistance has been so strong that the Democrats and their supporters have even made it their goal to blacklist and destroy anyone who even dares raise the question.

The tight security imposed on Biden’s election acts as proof that those allegations might very well carry weight. If Biden was truly elected legitimately, he would not feel the need to be surrounded by barbed wire and tens of thousands of soldiers, like any tinpot dictator. No, like Lincoln he would be able to nonchalantly walk through a crowd of fellow citizens, with everyone confident that the person the American people actually chose was now in office.

The military nature of Biden’s inauguration signals the end of American democracy in other ways. It is clearly a sign that the Washington swamp, having finally gotten rid of outsider Trump, is now telling us they will no longer tolerate further resistance to their power. That corrupt ruling class of bureaucrats can now wield the military against you if you dare oppose them, and today’s occupation of Washington was their way of proving this fact to everyone.

You will accept their rule, or you will face blacklisting, censorship, and even the sound of storm-troopers banging at your door, there to arrest you for wrong-think.

And if you doubt me, just give it time. The downward path to dictatorship by this Washington crowd has been steady and continuous since President Bill Clinton got away with perjury in the late 1990s. They will go there, mark my words.

What will Americans do in response? For myself, I tell them to go to hell. I will be a free American until the day I die, and if that means they come at me with guns because they don’t like what I write, so be it. It will only prove that I stand for freedom, and they for oppression.

Which side are you on?


Unfortunately, that is exactly where that journey takes him.
The vision that Zimmerman paints of vibrant human colonies on the Moon, Mars, the asteroids, and beyond, indomitably fighting the harsh lifeless environment of space to build new societies, captures perfectly the emerging space race we see today.
He also captures in Pioneer the heart of the human spirit, willing to push forward no matter the odds, no matter the cost. It is that spirit that will make the exploration of the heavens possible, forever, into the never-ending future.
Available everywhere for $3.99 (before discount) at amazon, Barnes & Noble, all ebook vendors, or direct from the ebook publisher, ebookit. And if you buy it from ebookit you don't support the big tech companies and I get a bigger cut much sooner.
58 comments