Bringing life to the slumping lifeless slopes of Mars 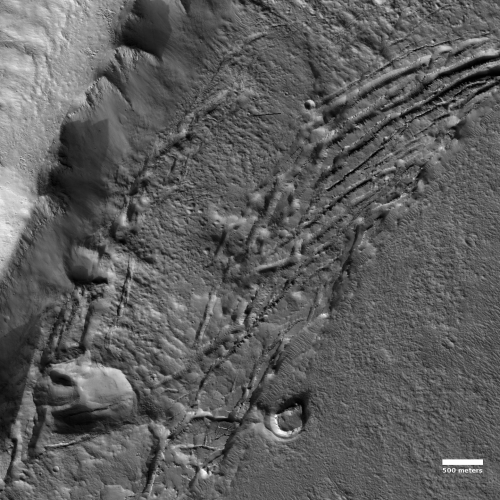 To me, the cool image to the right, cropped and reduced to post here, helps illustrate the most significant difference between Mars and Earth, its obvious lack of life. This lack fundamentally changes the nature of erosion on the Red Planet.

On Earth life covers practically every square foot of the surface, and that life probably does more than anything to reshape the surface, and it does it far more quickly than any geological or meteorological process. For example, even if we are in the most lifeless area of the Sahara Desert, with no plant life, the dunes will still be reshaped and changed simply by the passage of any animal, whether it be a lizard, camel, or human driving a jeep.

On Mars, there is no visible life, and this lack means that any changes we see are solely geological or meteorological in nature. From a scientist’s perspective, the view is clean, all changes wrought solely by inanimate nature, without the added factor of life.

In a sense, Mars gives us a view of what geological and meteorological processes would do on Earth, if the Earth was lifeless.

Today’s image, taken by the high resolution camera on Mars Reconnaissance Orbiter (MRO) on August 29, 2020, exemplifies this. Labeled “Slope Failures in Tempe Terra,” it shows the slow break-up and slumping of debris as it oh-so-slowly falls from higher terrain. The cracks developed as large chunks pulled apart as the material slide downward to the east.

This cracking took a lot of time. On Earth, during that time it would have either been obscured by plant life, or would have been distorted greatly by the traffic of animal life across its surface. Animals would have dug holes, and humans might have reshaped it to build homes and roads. On Mars, none of that happened, so the geology was free to evolve slowly, without interference, and now sits in plain view for scientists to interpret.

The overview map below helps give the wider context of those Martian inanimate natural processes, on a grand planetary scale.

These slumping slopes, as indicated by the blue cross, are found in a region dubbed Tempe Terra, on the southern cratered highlands but shaped more by volcanic processes than meteorite impact. The northeast-to-southwest trending cracks and ridges all came about by the rise of the Tharsis Bulge to the southwest, where Mars’ giant volcanoes reside. As the magma below pushed upward, it caused the surface to crack and separate. In Tempe Terra it also resulted in many small volcanoes and volcanic ridges, formed by the eruption of lava onto the surface.

Much of this volcanic activity is thought to have taken place about a billion years ago, with intermittent periods of activity since. And it sits there still, undisturbed for us to study, as if it happened yesterday.

Someday humans will bring life to Mars. Its tranquil environment will begin to see the same kind of fast alterations that are normal to Earth. We can already see this happening in every place on Mars where we have placed a rover. As it travels it leaves its tracks and its drill holes. The surface is changed by life, and is no longer inanimate.

We should not mourn this change, nor do anything to try to stop it. Life is part of nature, so any changes we bring to the surface of Mars will still be totally natural.

More important, when we get to Mars the red planet will no longer be dead. The changes we bring will be the result of animate processes. We will have turned a lifeless place into a place where children can play, and where a future for many can be worked out, for themselves.

For that possibility I would gladly give up the clean inanimate surface of Mars. The benefit far outweighs the cost, immeasurably.