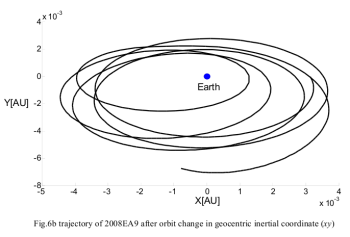 The real problem, of course, is adding that small “velocity increment” to the asteroid.

You can give the asteroid a quick push, using “conventional explosive, kinetic impactor, or nuclear explosive.” The problem with these techniques is that you have to have a very precise understanding of the composition, density, and make-up of the asteroid. For example, an impactor hitting a rubble pile will have far less success in moving it than if that asteroid was a dense solid body. Worse, an explosion might rip a rubble pile apart, sending the wreckage on a collision course with Earth. To put it mildly, such an event would have serious liability concerns for any private company.

A better method might be to give the asteroid a slow and steady push over a long time, using a space tug, a nearby heavy mass, or a beam of light — either from focused solar light or a pulsed laser — all of which slowly drag the asteroid into its new orbital path. Even here, however, it is necessary to have a better understanding of the asteroid before launching such a the tractor mission.

While at first glance all of this appears to be science fiction fantasy, the mining of asteroids has gigantic economic potential. As the scientists note, “a two kilometer-size metallic [near Earth object], for example, may contain rich metals and materials worth more than 25 trillion dollars.”

In other words, forget about science and political considerations. There is a real commercial need to mount a scouting mission to these near-Earth asteroids. And it appears the Chinese are thinking about this seriously, considering this is the second paper on the subject of accessing and adjusting the orbits of near-Earth asteroids to appear from them in less then two weeks.