September 11, 2017 at 9:27 am Robert Zimmerman Essays And Commentaries 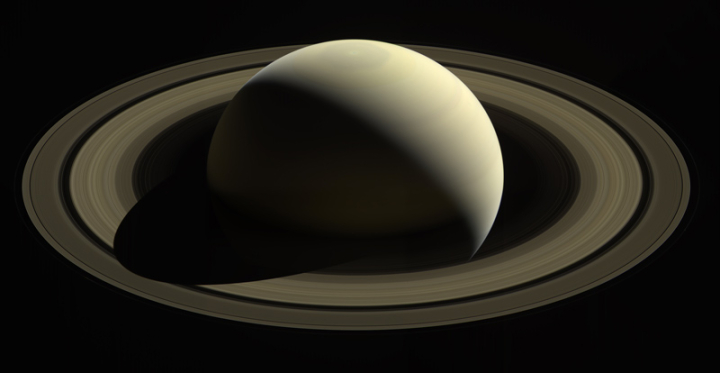 Cool image time! The picture above, reduced in resolution to show here, was taken in October 2016 during one of Cassini’s last distant orbits that gave it a global view of Saturn and its rings. Since it began its dives close to the gas giant such views have not been possible.

The mission ends this coming Saturday with a dive into Saturn. It was launched in October 1997, and after a seven year journey has spent the last thirteen years in orbit around the planet, providing us the first long term glimpse of a gas giant as its seasons evolved.

Cassini has been orbiting Saturn for nearly a half of a Saturnian year but that journey is nearing its end. This extended stay has permitted observations of the long-term variability of the planet, moons, rings, and magnetosphere, observations not possible from short, fly-by style missions.

When the spacecraft arrived at Saturn in 2004, the planet’s northern hemisphere, seen here at top, was in darkness, just beginning to emerge from winter (see Cassini’s Holiday Greetings​). Now at journey’s end, the entire north pole is bathed in the continuous sunlight of summer.

The spacecraft was also able to observe the seasonal changes that occurred to Titan. It also studied the plumes coming from the tiger stripe cracks on Enceladus, shown below the fold in a movie created by Cassini over a 14 hour time period in August 2017.

I expect that scientists will be exploring Cassini’s data archive for decades, finding many things not noticed in their initial viewing. Unfortunately, we will not have another spacecraft taking new pictures in orbit around Saturn to compare with Cassini’s past images for many decades to come. On Saturday, we go blind.