Imaging the ground under the Greenland ice sheet

In a paper published today in Geophysical Research Letters of the American Geophysical Union, scientists describe how they have been able to produce remarkably detailed images of the ground buried almost a mile under the ice sheet of Greenland. These radar techniques are the same used in the past by spacecraft to image the hidden surface of Venus, only far more sophisticated. 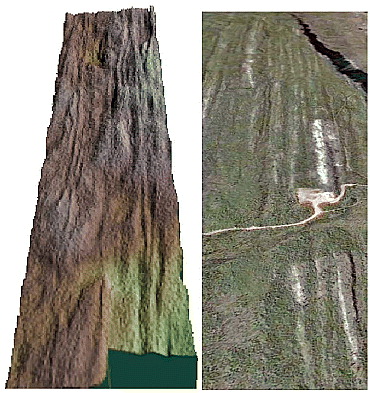 This image from the paper compares the radar image of the Greenland surface (on the left) to an photograph of a known surface feature in the Northwest Territories of Canada, produced thousands of years ago by the giant icesheets of the last Ice Age. Both are at the same scale, about a third of a mile across, and are looking at the surface at an oblique angle of about 45 degrees. With the radar-produced image on the left, sunlight is simulated as coming from the right, with the elevation increasing as the colors go from green (lowest) to yellow to brown to purple (highest).

The long grooves, generally 30 to 100 feet deep and extending sometimes several miles, are produced as the icesheet slides across the ground. In the radar image, however, these grooves are slowly being ground out now.

It is the resolution of this technique that is so exciting. That they can look through ice almost a mile thick and resolve objects that are only tens of feet across tells me that someday it will be possible for spacecraft to map the smallest features on the surface of Venus or Titan. More exciting, this suggests that the technology will one day exist to even map the unknown surface of gas giants like Jupiter or Saturn, and do it in breathtaking detail.