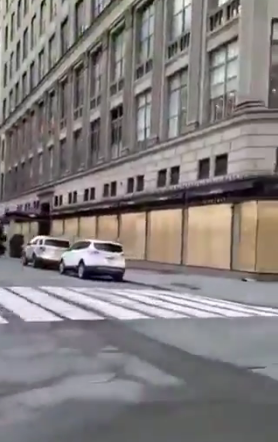 The riots and looting and the almost willing endorsement and support given to those riots and looting by local Democratic mayors and councils and state governors demonstrates their incompetence to hold office. For the United States to survive as a nation ruled by law that also supports the freedom of its citizens, voters must reject them, unequivocally.

Normally voters focus on the big ticket campaigns that get the most press coverage. This means they generally ignore the local elections, or if not they tend to vote for the incumbent, regardless of party. It is essential for the future of the nation as well as the Democratic Party itself that this laziness end this coming November. Voters must vote against Democrats, no matter what, because by throwing out the anti-American leadership of that party at all levels it will allow that party to reshape itself in a different direction. And we can be certain that it is very unlikely that this new direction will be more radical, more communist, and more fascist. A major across-the-board defeat in November will force a moderating political change, and maybe help make the Democratic Party become a true loyal opposition.

Find out who is running in your local elections. Make a point when you go to the polls to support the Republican candidates, in every case. And if there are no Republicans running (a sad situation often found in Democratic Party urban strongholds where that party has acted for decades to squelch any opposition) see if you can write in a candidate. If there are other minor party candidates, find out something about them beforehand, and vote for the least socialist and most pro-American you can find.

Above all, don’t be afraid to vote for an unfamiliar name. Voting for incumbents at the local levels in urban Democratic strongholds is one of the reasons we are now where we are, with local Democratic Party political leaders endorsing rioting and violence while calling for the shuttering of police departments, even as they simultaneously call for strict gun control laws that will disarm all ordinary law-abiding citizens.

These Democrat local leaders have even made it a point — in their fear of COVID-19 — to release thousands of criminals from prison (many of which were convicted for violent crimes), even as they imposed strict house arrests on the general law-abiding public while shutting down religious gatherings and bankrupting legal businesses.

The Democratic Party is not on our side, no matter if you are white, black, brown, or violet. They support the criminals, the killers, the hate-mongers, and the law-breakers. They must be removed from office, as quickly as humanly possible.

This call to vote Republican is not however a partisan endorsement of that party. Far from it. The Republican Party is in many ways no different than the Democrats. They also want power, in order to conserve and expand their own financial gains obtained in government. For this the citizens of the U.S. must always be aware. A vote for a Republican now is not really an endorsement of their path to power, but a demand that the incompetence, hate-mongering, and anti-Americanism from the Democrats nationwide must end.

Should Trump and the Republicans win nationwide in November, and then fail to bring major sweeping changes in Washington and elsewhere in the next four years, then maybe after a crushing defeat in 2020, a renewed Democratic Party in 2024 will give Americans a new option, and should then, and only under those conditions, be given a second chance.

Either way, in 2020 it is the Democrats who should lose big. They have become a party of power-hungry criminals, of corrupt bureaucrats working to overthrow the government, of looters and rioters, of illegal immigrants, of lock downs and masks, and finally of economic bankruptcy because they are touting socialism and communism as our future, ideologies that have always failed whenever tried.


Unfortunately, that is exactly where that journey takes him. The vision that Zimmerman paints of vibrant human colonies on the Moon, Mars, the asteroids, and beyond, indomitably fighting the harsh lifeless environment of space to build new societies, captures perfectly the emerging space race we see today. He also captures in Pioneer the heart of the human spirit, willing to push forward no matter the odds, no matter the cost. It is that spirit that will make the exploration of the heavens possible, forever, into the never-ending future. Available everywhere for $3.99 (before discount) at amazon, Barnes & Noble, all ebook vendors, or direct from the ebook publisher, ebookit. And if you buy it from ebookit you don't support the big tech companies and I get a bigger cut much sooner.
46 comments