Land of swiss cheese and spiders 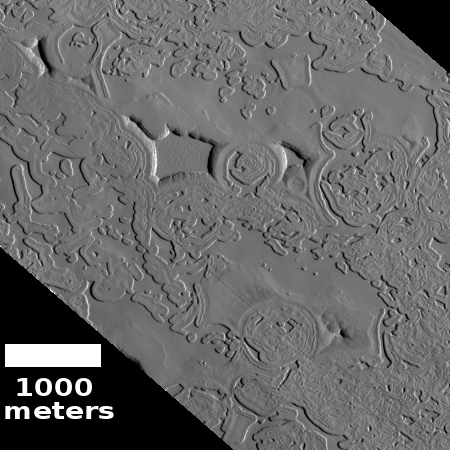 Time for some cool images! In one of their periodic captioned releases of an interesting high resolution image, the Mars Reconnaissance Orbiter (MRO) science team this week released a picture of the strange “swiss cheese” terrain found throughout the Martian southern polar cap. (I have already highlighted in an early post the spiders that form in the south pole as the carbon dioxide evaporates.) The image to the right is a cropped section of that image, which you can see in its entirety if you click on it.

The South Polar residual cap is composed of carbon dioxide ice that persists through each Martian summer. However, it is constantly changing shape.

The slopes get more direct illumination at this polar location, so they warm up and sublimate, going directly from a solid state to a gaseous state. The gas then re-condenses as frost over flat areas, building new layers as the older layers are destroyed.

The captioned link above also included a link to a gif animation showing how this terrain has changed since 2009. The holes have become bigger, their cliffs retreating with time.

The section I highlight above not only shows the retreating swiss cheese dry ice, you can also see ghosts of several buried craters slowly becoming visible as the dry ice evaporates away.

This is only one of many images taken of the south pole by MRO. In the October archive release, I found almost two dozen, and that’s only the images taken during August of this summer. MRO takes images of the south pole regularly to track its changes, though I suspect it took more this summer because the global dust storm blocked imagery in the middle latitudes. Below and to the right is just one of these images, a particularly good illustration of the swiss cheese formation. 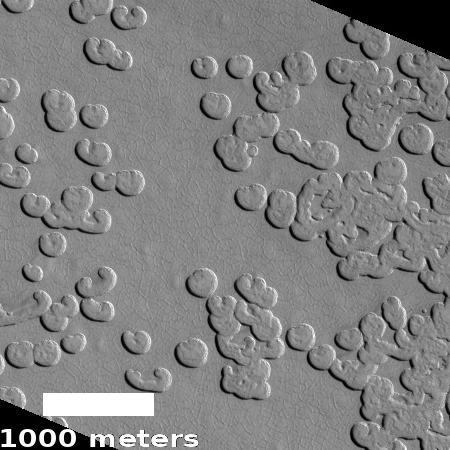 Unfortunately, the HiRise archive does not provide an overview image looking down at the south pole. It is therefore difficult to see how the many images taken this past month relate to each other, or to the polar cap’s retreating edge. 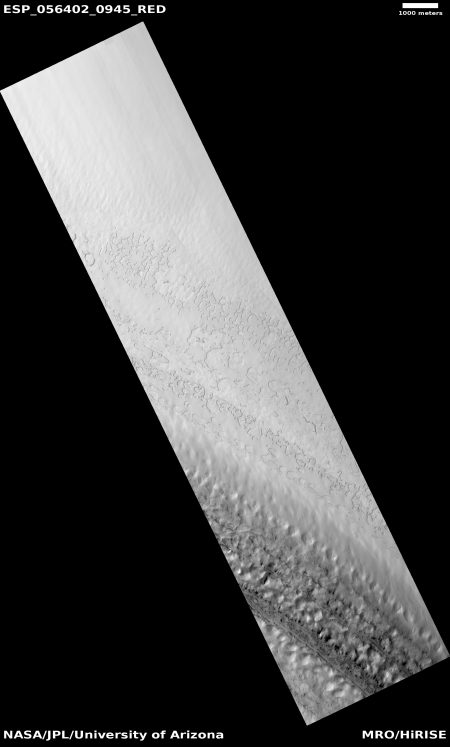 The image to the right might help put the swiss cheese in perspective. Reduced in resolution to show here (click on image to full resolution original), it shows the transition from the higher cap layers to the south (at the bottom) and the lower layers now exposed by evaporation to the north (at the top). The swiss cheese appears to be the last feature in this evaporation process. The release link for the image places it at about 85 degrees latitude, which appears from all the images to be the approximate location of the cap’s edge. That many of the other images above at this approximate latitude do not show this edge, however, also illustrates the unevenness in which the cap’s size changes.

One aspect of these images that was highlighted by the first image above is the monitoring of these locations by MRO over time. I did not research this, as it would take more time than I have, but I am sure that many of the imaged locations above have been photographed by MRO in the past as well, and scientists are pouring over these images to see how the terrain has evolved with time. Not only will that tell them something about the nature of the polar cap, the revealed lower layers will tell them something about Mars’s past.