Summary: Curiosity’s exploration of Vera Rubin Ridge is extended, while an attempt by Opportunity to climb back up Perseverance Valley to reach an interesting rock outcrop fails. 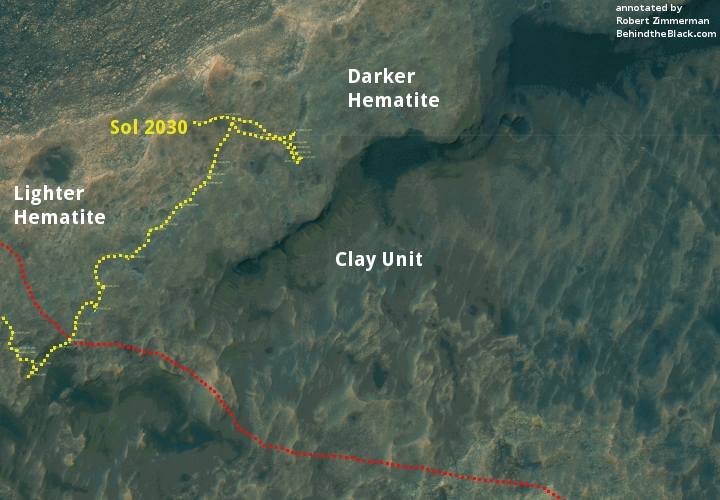 Since my March 21, 2018 update, it has become apparent that the Curiosity science team has decided to extend the rover’s research on Vera Rubin Ridge far beyond their original plans. They have continued their travels to the northeast well past the original nominal route off the ridge, as indicated by the dotted red line on the traverse map above. Along the way they stopped to inspect a wide variety of geology, and have now moved to the north and have actually begun descending off the ridge, but in a direction that takes the rover away from Mount Sharp and its original route. As noted in their April 25 update,

Curiosity is continuing her march to the north and west, descending through the stratigraphic layers exposed in Vera Rubin Ridge and working her way back towards the unit known as the Blunts Point member, just below the ridge. Curiosity will continue her investigation of each of these stratigraphic layers, filling in all of the details necessary to interpret the geologic history of this region.

It appears that the science team wants more data on the differences between the geology on top of Vera Rubin Ridge and the geology just below. To do this the rover needs to descend. However, this is a ridge, and they could have just as well descended as they approached Mount Sharp along the original route. That they have chosen to descend away from Mount Sharp suggests either that the geology is more interesting and accessible in this direction, or that they have still not decided on their future route to the east and uphill.

It could be that upon inspection they have found that their original planned route up the mountain has turned out not to be as favorable as first indicated from orbital images, and have now picked a different route. If they descend off of Vera Rubin Ridge more to the north and east, they will have a more direct route to the first of two recurring seeps that they hope to get a close look at.

The problem is that, as far as I can see, the orbital images do not really show any better routes to the east off of Vera Rubin Ridge than their original planned route. I therefore think that they have simply decided that the geology on and just below the ridge required more research time before moving on and up. For example, this detour to the north has allowed them to get a close look at a small crater on the ridge, as well as the geology of ejecta field surrounding it.

During these travels they also earlier this week stopped to take some new close-up images of the rover’s wheels to check on their wear. As noted on the April 23 update,

We do this activity, dubbed Full MAHLI Wheel Imaging (or FMWI in NASA acronym speak), every few hundred meters to track damage to Curiosity’s wheels caused by the terrain. It’s important for us to take this observation in order to estimate how much farther the rover will be able to drive before the wheels become inoperable, and also to understand if the sharp edges of the broken wheels risk damaging the nearby cables. So far, we estimate we’re in pretty great shape for our plans to drive a lot farther up Mt. Sharp!

For the last few years, we’ve been actively working to mitigate wheel damage in several ways. JPL engineers developed some smart driving algorithms called “traction control” that reduce forces on Curiosity’s wheels as the rover climb over rocks. Geologists like myself also help by planning drive paths over terrain that is safer for the wheels. We do this on a sol-to-sol basis in tactically staffed roles known as Surface Properties Scientist (SPS), which is what I did today. Strategically, we also work with the orbital datasets to predict what the terrain ahead will look like, and we use these predictions to choose long-term paths that will be easiest on the wheels without sacrificing science. If you look closely at the rover path from the last few sols in the orbital data, you may notice we’ve been driving along terrain that looks darker and bluer in this false color image compared to the nearby bright, tan rocks. This path corresponds to terrain that is filled with pebbles and hard-packed sand, and we think it’s a little nicer for the wheels than the bright bedrock, which can sometimes have sharp edges. The geologic term for these sharp edged rocks is ventifacts, and they are formed by wind erosion over millions of years. While they probably won’t hurt the wheels too much, we’d prefer to avoid them when possible.

Below I have posted a comparison of the damage on one wheel (first posted in my September 6, 2017 update) with this week’s image of the same wheel. The two images suggest that little additional damage has occurred on that wheel during the past eight months. This is good news, and suggests that the approach taken by the science and engineering teams is working. 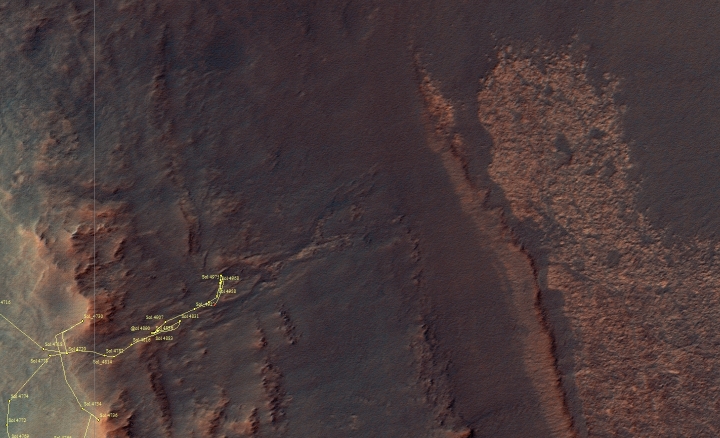 Opportunity remains about halfway down the rim of Endeavour Crater, inside Perseverance Valley, as shown on the traverse map above, taken on Sol 4997, about 70 sols back.

The rover’s travels continued to be limited because of the limited sunlight available during winter to charge its solar-powered batteries.

Despite this, they have moved about carefully, checking out the geology at various points. Last week they decided to move back uphill to get a closer look at some “tabular rocks,” but the rover experienced problems with the route chosen. 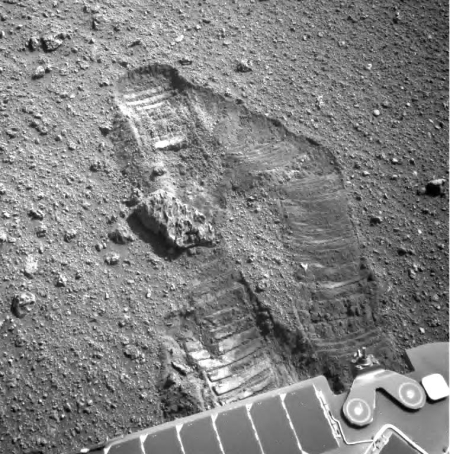 With [the in-situ] activities complete, the rover moved on Sol 5057 (April 15, 2018), backing up and turning just about 14.8 feet (4.5 meters) to set up the approach upslope to the tabular rocks. The usual post-drive Navigation Camera (Navcam) panoramas were collected along with some targeted 13-filter Pancam images.

On the next sol, Opportunity tried to go upslope to the tabular rocks. However, the terrain was difficult and the rover experienced high slip. Just under 9.8 feet (3 meters) of motion was achieved. More post-drive documentary imagery was collected. The assessment is that a different, less difficult route to the tabular rocks must be taken.

So, in future sols a more roundabout path to the rocks will be planned over multiple sols.

The image on the right, cropped and reduced in resolution to show here, shows this slippage. The rover apparently had trouble gaining traction in the soft ground.

The little-rover-that-could marches on. Planned to work only about 90 sols, Opportunity has now operated more than 55 times longer. They will find a new route and continue on!