Shut down fascism in the Smoky Mountains

Today, October 1, 2013, my wife Diane and I went hiking in Great Smoky Mountains National Park. We did this despite the news from Washington that the federal government had shut down due to the lack of a funding from Congress and that all the national parks were closed.

The news reports had said that the National Park Service would close all roads into the park except for New Found Gap Road, the one road that crossed over the mountains from Tennessee to North Carolina. They couldn’t close this road because it was a main thoroughfare used by the public for basic transportation. Moreover, my research into the hikes we wished to do told me that several of those hikes originated on trailheads along this road. In traveling the road the day before, we had seen that these trailheads would not only be difficult to close, it would be dangerous and stupid to close them. For one, the road was windy and narrow. If there was a car accident or someone had car problems, any one of these parking areas might be essential for the use of the driver as well as local police and ambulances. For another, there are people still backpacking in the mountains who will at some point need to either exit with their cars or be picked up at these trailheads. Closing the trailheads will strand these hikers in the park, with dangerous consequences.

So, despite the shutdown, off we went to hike the Appalachian Trail, going to a well known lookout called the Jump Off, an easy 6.5 mile hike that leaves from the parking area at New Found Gap, the highest point on New Found Gap Road that is also on the border between Tennessee and North Carolina. It is also probably one of the most popular stopping points along the road, visited by practically every tourist as they drive across. 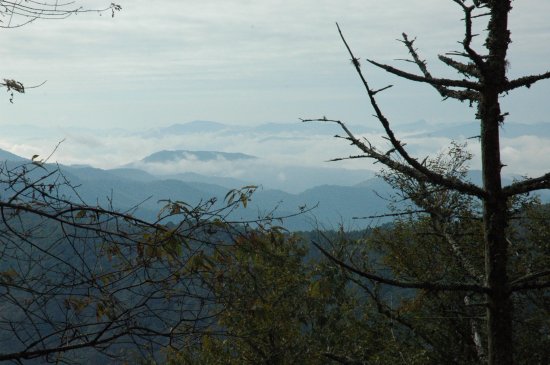 The hike itself was beautiful, if a bit foggy and damp. The picture above shows one of the clearest views we had all day. Nor were we alone on this hike. We probably saw one to two dozen other hikers, heading out to either the Jump Off or Charles Bunion (another well known day hike destination along this section of trail). 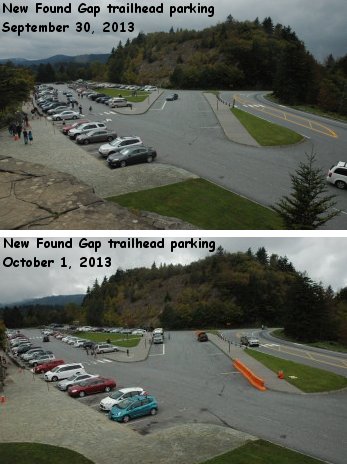 When we got back to the parking lot, I took some additional pictures. It seemed to me that something had changed since the day before. If you look at the image on the left, which compares an image taken on September 30 at the top with a comparable image taken on October 1, you will notice the appearance of orange barricades close to the lot’s entrance and exit. These barricades had appeared either while we were hiking or during the night. Moreover, as we drove down the mountain we then noticed that many of the pull offs and trailhead parking lots now had orange cones blocking access, even in cases where there were many cars parked there. We also saw several trucks and workers with more cones, placing them in several additional lots.

It is obvious that the Park Service intends to block access to these trailheads, even though it literally costs them nothing to leave them open and by closing them they actually increase the possibility of serious problems for drivers on the road and hikers still in the park. In fact, it is costing them money they don’t have trying to block access.

To block access is thus a deliberate, senseless, and mean-spirited act that demonstrates quite clearly the political goals of the Obama administration during this shutdown. The administration has decided it will use its power to do as much harm as possible to the American people as it can, with the hope that this harm will cause the public to rise up and throw the Republicans out for refusing to pass the budget that Obama wanted and demanded. By limiting access to the park, the administration will also cause harm to the thriving businesses just outside the park that depend on the tourism trade.

Further proof of this vicious and fascist political strategy by the Obama administration could also be seen in Washington, DC., where the park service put up barricades to try to block access to the World War II memorial, despite the fact that it is an open-air monument that is unmanned by any park service staff. Before the shutdown the memorial cost the park service nothing. After the shutdown it is costing them a lot to try to keep people out. When a large group of veterans, many in wheelchairs, arrived today to visit the memorial, however, they decided to tell the park service what they thought of this policy, and tore the barricades down.

More Americans have to follow the lead of these veterans. The time has come for some courageous defiance by everyone. For example, we plan to go hiking one more time while we are here, on Thursday. If the shutdown is still in place, I intend to remove those cones and park my car and go hiking. Since a park ranger has already told me they will not be providing any service in the park, what will they do? They won’t be there to stop us.

Nor should I be alone in this. For example, I wonder why the governors of Tennessee and North Carolina are not defiantly announcing that they intend to use the police to remove the cones themselves, to make sure the trailheads along this major road remain open, for both safety and the economic health of their states. What will the National Park Service do, arrest the governors and the police? As I said, they won’t be there.

One last point. The New Found Gap parking lot has a epic and large stone platform at one end, built back when the park was first dedicated. It is from the top of this platform that I took the images of the parking area above. Prominently displayed on the wall of this platform is a plaque, with the following words (see image below):

“For the permanent enjoyment of the people.” Hollow words indeed. If the National Park Service and the Obama administration tries to deny Americans the right to enjoy these parks, even when there is absolutely no justifiable reason for doing so, they will prove to all that they don’t maintain the parks for the American people, but for the sole benefit and power of the Park Service and the federal government.

The only way to give these words their true meaning and stop this grab for power is to make sure the Park Service and the Obama administration fail in they attempt to hijack what belongs to the people. The people have to not only demand access, they have to refuse to obey the attempt to shut them out. 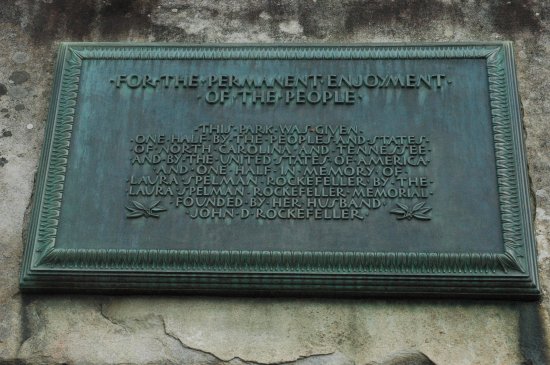