Yesterday NOAA posted its monthly update of the solar cycle, covering sunspot activity for July 2018. As I do every month, I am posting it below, annotated to give it some context.

This might be the most significant month of solar activity that has been observed since Galileo. Except for two very short-lived and very weak sunspots that observers hardly noted, the Sun was blank for entire month of July. This has not happened since 2009, during the height of the last solar minimum.

What makes this so significant and unique is that it almost certainly signals the return of the next solar minimum, a return that comes more than a year early. The solar cycle the Sun is now completing has only been ten years long. It is also one of the weakest in more than a hundred years. This combination is unprecedented. In the past such a weak cycle required a long cycle, not a short one.

The graph above has been modified to show the predictions of the solar science community. The green curves show the community’s two original predictions from April 2007, with half the scientists predicting a very strong maximum and half predicting a weak one. The red curve is their revised May 2009 prediction. The yellow line compares the present activity with the activity during solar minimum in 2008 and 2009. 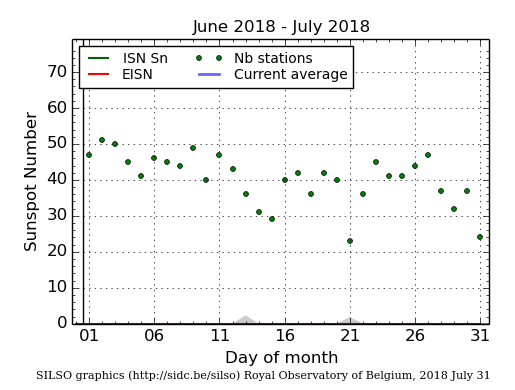 The graph on the right, produced at the Sunspot Index and Long-term Solar Observations (SILSO) webpage on July 31, illustrates the weakness of activity for July. Except for two very minor sunspot events that faded very quickly (indicated by the tiny grey bumps at the bottom of the graph), the hemisphere of the Sun that faced the Earth was blank for the entire month.

For almost a decade some solar scientists have predicted, based on the Sun’s recent behavior, that we are about to enter an era of little sunspot activity, with the possibility that we could be facing the first Grand Minimum since the Maunder Minimum in the 1600s. During that last grand minimum, named for the man who identified it, the Sun’s solar cycle produced almost no visible sunspots for decades. Though scientists think the eleven-year solar cycle was occurring, sunspot activity was so weak that the solar astronomers at the time, equipped with the very first telescopes, could not see it.

The Sun’s lack of activity in July, so early after such a weak solar maximum, lends more weight to this theory. Without doubt the Sun has been behaving in a different manner for the past dozen years. The last solar minimum was unexpectedly long and pronounced. The solar maximum that followed was weak, and though double-peaked it was the first ever observed where the second peak was stronger than the first.

The significance for scientists should a Grand Minimum be approaching would be priceless. Armed with today’s vast array of sophisticated ground-based and space-based solar observatories, they would have the opportunity to observe the Sun as it behaved in a way that they have never seen. The knowledge gained would certainly allow them to get a better understanding of the Sun’s solar cycle and what causes it, something they presently only have a somewhat superficial understanding of.

As significant and possibly more important, a Grand Minimum would help scientists pin down the effect the Sun’s solar cycle has on the Earth’s climate. During the Maunder Minimum in the 1600s there is solid evidence that the Earth’s climate cooled, so much so that there were crop failures and years with no summers. The cooling was so pronounced that the time was labeled the Little Ice Age.

When the Sun is inactive, it allows more cosmic rays to penetrate into the inner solar system. Preliminary research at the Large Hadron Collider at CERN has suggested that more cosmic rays produce more clouds in the atmosphere, which act to block and reflect sunlight and thus cool the Earth. (For a detailed explanation of this research, watch the video at this link.)

We don’t yet know if this theory is true. What we do know is that since the Sun’s solar activity began to decline at the start of this century, the world’s global temperature, as observed as well as predicted, has generally ceased warming. Some global warming scientists think this pause in warming is merely natural variation, and that the warming will resume as predicted, with a vengeance. Others have wondered if the global warming climate models are wrong, and have not considered some factors, such as the Sun’s solar cycle, as much as they should.

The arrival of a new Grand Minimum will help scientists figure this out. And if the climate itself cools, as it did during the last grand minimum in the 1600s, we might find that the solar cycle plays a much bigger role in the climate than carbon dioxide.

We also might find that a bit of warming might be a good thing. As noted, the Little Ice Age produced famine and crop failures. Research has shown a warmer climate, with more carbon dioxide in the atmosphere, actually promotes crop growth and helps to green the Earth.

The return of another little ice age now might in the end make us pine for some global warming.