In the month of December 2019 the Sun continued its longest stretch of overall sunspot inactivity ever recorded, reaching seven months in length. At no point since the last grand minimum in the 1600s have scientists ever seen so few sunspots over so long a time period.

Below is NOAA’s December update of its graph showing the long term sunspot activity of the Sun. As I have done now every month since this webpage began in 2011, it is posted below, with annotations: 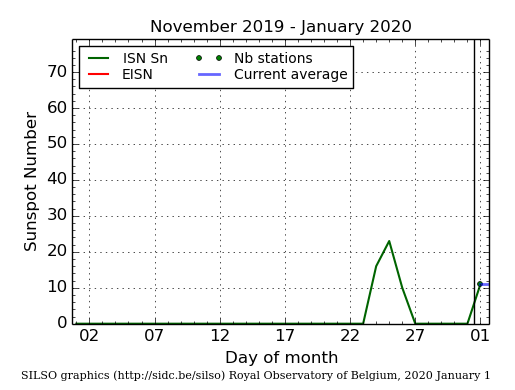 December saw only two sunspots, both becoming active on the same day, December 24. Both also had a polarity belonging to the next solar cycle, providing evidence that we will have another sunspot maximum sometime in the next five years, and that we are not heading to another grand minimum where there are no sunspots for decades.

The SILSO graph to the right gives a close-up look at the month, and provides further evidence that a new solar maximum is coming. Note the new sunspot that appeared on January 1st. That sunspot also has a polarity assigning it to the next solar maximum. While the sunspots in December were weak and decayed quickly, the January sunspot has been stronger, sticking around for at least a week.

The unknowns remain. Though the detection of sunspots assigned to the next solar maximum strongly suggests that a grand minimum is not about to take place, we still might be surprised. When the last grand minimum occurred in the 1600s, the telescope had just been invented, and scientists really did not know what to look for on the Sun. They didn’t even know that there had been a solar cycle up until that century. It could be that new cycle sunspots did occur, and then stopped appearing.

Or not. I am speculating wildly. All we can do is watch and wait to find out.

Meanwhile, the Sun’s influence on climate change remains uncertain. Periods of weak sunspot activity have generally been associated with cold weather, for reasons that are not yet understood. If such things happen again, as appears to been the case with the lack of warming for the past two decades (during this period of weak sunspot cycles), then we might be able to pin down the Sun’s exact contribution in determining the Earth’s climate. And we need to know that exact contribution in order to better model the Earth’s climate. Right now most climate computer models do not do a very good job, and that failure is partly because of a lack of understanding when it comes to the Sun.