The hidden glaciers of Mars 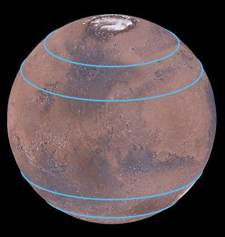 Several satellites orbit Mars and on satellite images, researchers have been able to observe the shape of glaciers just below the surface. For a long time scientists did not know if the ice was made of frozen water (H2O) or of carbon dioxide (CO2) or whether it was mud.

Using radar measurements from the NASA satellite, Mars Reconnaissance Orbiter, researchers have been able to determine that is water ice. But how thick was the ice and do they resemble glaciers on Earth? A group of researchers at the Niels Bohr Institute have now calculated this using radar observations combined with ice flow modelling.

The press release has one typo that is important. The belts appear to be located between 30-50 degrees latitude, not 300-500 (the degree sign became a 0 by mistake).

It is important to recognize the uncertainty of this discovery. Orbital images have seen features that suggest glaciers. The evidence that it is water-ice and that the water-ice is still largely present comes from the computer models. Computer models are notorious for seeing things that end up not being there.

Nonetheless, this result is important. It is further strong evidence that Mars still contains a lot of water locked in its immediate subsurface, where future colonists can mine it and use it to survive and build their homes.