The job boom for government regulators under Obama

The chart of the day, from John Merlune at Investor’s Business Daily: 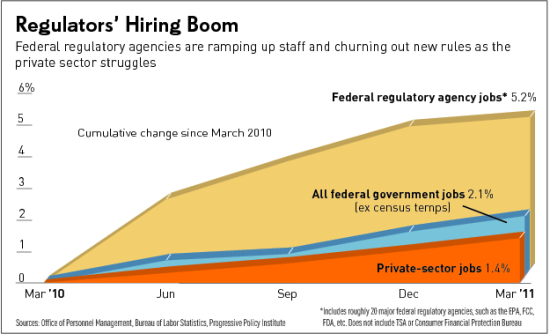 Merlune’s article outlines in frightening detail how there has been a job boom in only one place during the Obama administration, the government regulatory industry.

Regulatory agencies have seen their combined budgets grow a healthy 16% since 2008, topping $54 billion, according to the annual “Regulator’s Budget,” compiled by George Washington University and Washington University in St. Louis. That’s at a time when the overall economy grew a paltry 5%.

Meanwhile, employment at these agencies has climbed 13% since Obama took office to more than 281,000, while private-sector jobs shrank by 5.6%.