The known ice cliffs on Mars

Last week there was a big NASA story about the discovery of eight locations on Mars where the evidence strongly suggests that these spots have cliff faces with exposed layers of water ice.

The press release however did not provide an overview about where those eight locations were. Only two locations were given, one for a scarp in Milankovič Crater in the northern hemisphere, and one in an area called Promethei Terra, located in the remote cratered highlands in the southern high-mid-latitudes. 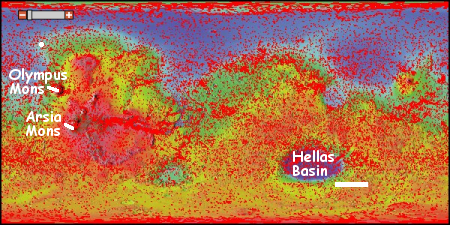 After much digging (and some assistance from John Batchelor) I was finally able to obtain the latitudes and longitudes of all 8 locations. All but the scarp in Milankovič Crater crater (shown by the white dot north of Olympus Mons) are located in the white rectangular box shown to the south and east of Hellas Basin, the area with Mars’ lowest elevation. This part of Mars is not well imaged with the high resolution camera on Mars Reconnaissance Orbiter (indicated by the fewer number of red squares in the image), mostly because it appears relatively boring from a distance. Nothing appears to be there for hundreds and hundreds of miles except craters, sand, and sand dunes..

The discovery of these scarps in this area however changes the picture. It suggests that cratered highlands that surround Hellas Basin, including those close to the planet’s equator, could contain similar buried layers of ice. More research is necessary to pin down more locations, especially those closer to the equator where conditions might be more hospitable for a colony.

Moreover, educated readers of Behind the Black have previously noted that because of Hellas Basin’s low elevation the air pressure there is thicker, and therefore the location has some advantages as a potential colony location. These ice scarps raise the value of Hellas Basin considerably, as they suggest that such layers could easily be exposed as you descend into Hellas Basin. If such layers are exposed on the northern flanks of the basin, they would be at latitudes of around 25 to 30 degrees south, a much more friendly latitude for settlement.