After fifty years of following space, I finally saw a big rocket launch today. Below is one of the pictures I took of Endeavour as it roared into the sky.

The experience was immensely satisfying, to put it mildly. Watching the shuttle rise up on a column of flame and smoke made me feel young again, my heart racing with excitement. Then Endeavour disappeared into the clouds, and we stood waiting for the roar of liftoff to travel the eleven miles to us. The long wait made this experience far different from what one sees on television. Then the rumble arrived, deep and low, but not as loud as I expected. One experienced launch-watcher explained that the low clouds and humidity might have muffled the sound. Bob Rose said that it was what he expected for this location, and that my expectations were based on those who experienced the launch from the press site at three miles. I think Bob is almost certainly right.

Later today I will put up a longer post, describing what it was like to stand among like-minded space nuts who had traveled from far and wide to see a crew of humans leave the Earth’s gravity and help trace a warm line of life across barren space. 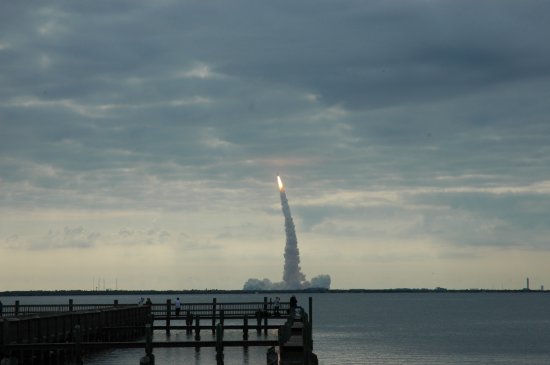