The vast northern plains of Mars 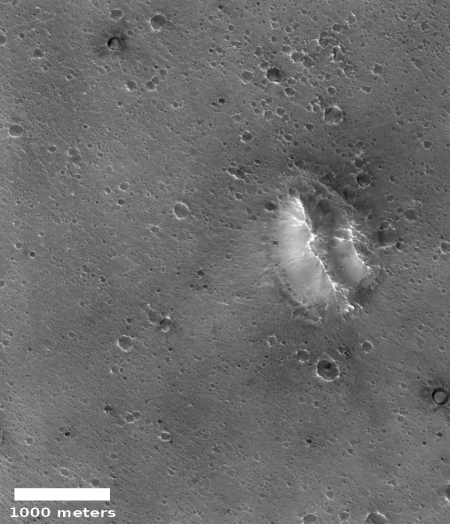 Cool image time! Actually, this image, found in the October image release from the high resolution camera of Mars Reconnaissance Orbiter (MRO), is not that interesting, in its own right. Context is all!

The image on the right is a small section cropped and reduced in resolution from the full image, which you can see by clicking on it. It shows one of the only interesting features in this long image strip, a small mesa sticking out all by itself in a flat featureless plain pockmarked by various small craters.

The release has no caption, though it is entitled “Northern Plains Survey.” The northern plains, while having a lot of interesting features that attract the attention of planetary scientists and thus get photographed at high resolution, is mostly featureless, at least at the resolution of the wide field survey cameras on many Mars orbiters. In order to know what is really there, they need to take high resolution images systematically, of which this image is obviously a part. 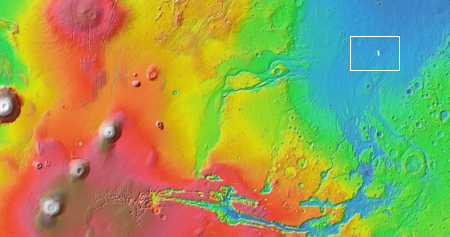 The problem is that there is so much ground to cover. This particular image was taken of a spot in the middle of the plains just to the north of the drainage outlets from Valles Marineris, as shown by the context map to the right. The tiny white spot to the right in the middle of the blue plains north of those drainage outlets is the location of this image. 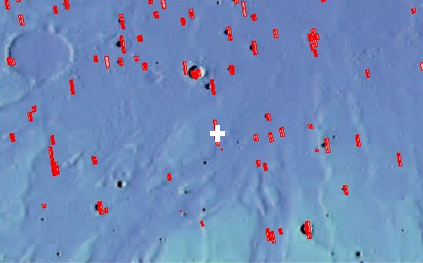 To understand how much ground needs to be covered, to the right is a close-up of the area shown by the white box in the first image above, with red rectangles indicating where MRO has already taken images. The white cross is the subject image. As you can see, most of this immense plain has not yet been imaged. It is almost as if they threw a dart to pick this one location. Most everything around it remains unseen at high resolution. Thus, to understand the geology of this one image is hampered because the surrounding terrain remains unknown, in close detail.

Mars is a big place. It is an entire planet, with the same land surface as the Earth’s continents. It still contains many mysteries and unexplored places. It will take generations to see it all.