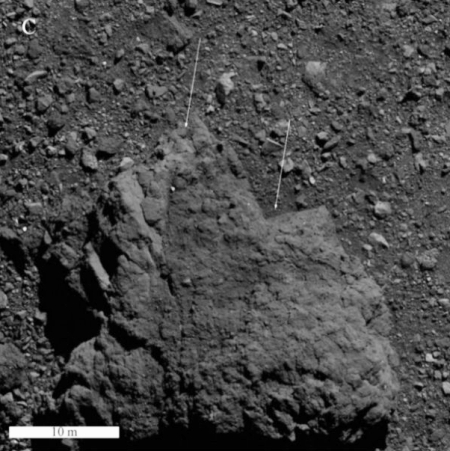 Today was supposed to have been the second day of the week-long 51st annual Lunar & Planetary Conference, sadly cancelled due to fear of the Wuhan virus. As I had planned to attend, I am now spending each day this week reviewing the abstracts of the planned presentations, and giving my readers a review of what scientists had hoped to present. Because I am not in the room with these scientists, however, I cannot quickly get answers to any questions I might have, so for these daily reports my reporting must be more superficial than I would like.

On this day the most significant reports came from scientists working on the probes to the asteroids Bennu and Ryugu as well as the probes to the Moon. The image to right for example is from one abstract [pdf] that studied the texture differences found fourteen boulders on Bennu. The arrows point to the contacts between the different textures, suggesting the existence of layers. Such layers could not have been created on Bennu. Instead, these rocks must have formed on a parent body large enough and existing long enough for such geological processes to take place. At some point that parent body was hit, flinging debris into space that eventually reassembled into the rubble pile of boulders that is Bennu.

Other abstracts from scientists from both the Hayabusa-2 mission to Ryugu and the OSIRIS-REx mission to Bennu covered a whole range of topics:

Abstracts were also submitted by scientists from China’s Chang’e-4 lunar lander and Yutu-2 lunar rover as well as India’s Chandrayaan-2 orbiter. The Chandrayaan-2 results were mostly preliminary, demonstrating that the orbiter’s instruments were all functioning as planned. The results from China were more concrete. 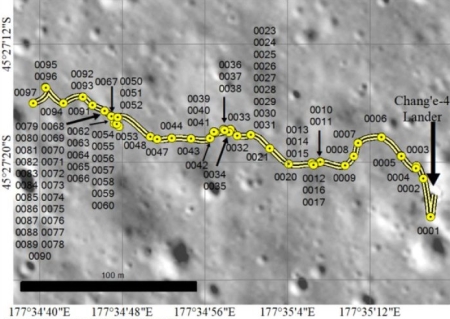 The image to the right from one abstract [pdf] shows Yutu-2’s route through its first 12 days on the lunar surface (now extended to fifteen). Overall, both Yutu-2 and Chang’e-4 have found that the material at their landing site is dominated by ejecta from a nearby large crater called Finsen, located to the northeast and outside of the larger Von Karman crater where the probes sit.

More important, the data has found that the bulk of the material so far studied is from the Moon’s lower crust, not its deep mantle as had been hoped. This does not mean they won’t get good data, but they have not yet found anything from the deepest depths and thus providing information never before seen.

There is also one Chinese abstract [pdf] detailing that country’s future plans to send a mission to the Moon, dubbed Chang’e-7, that would include an orbiter, a second relay satellite, a lander, a rover, and what they are calling a “mini-flying probe” that will be used to fly into a permanently shadowed crater to look for evidence of water. How it will fly was not clearly explained.

This abstract also outlined the overall goals of the Chinese lunar program, which is aimed at the Moon’s south polar regions where water may exist in those permanently shadowed areas, with a long term goal to put ” “a robotic scientific research station prototype … built on the south pole by 2035.” China intends to establish itself in this valuable lunar real estate, and to do so as quickly as possible. 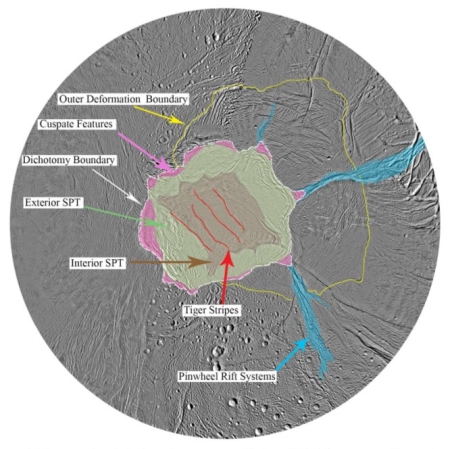 Other abstracts describe the possible discovery of active dry ice glaciers at the Martian south pole, the mapping of alluvial fans in the canyons of Valles Marineris, a close look at the river delta-like fan at the Perseverance rover landing site in Jezero crater, and a bunch of studies trying to squeeze more results from the data gathered by New Horizons’ fly-by of Pluto.

One abstract [pdf] included a cool map, shown to the right, of the south pole regions of Enceladus, where its tiger stripe fissures are located that have water vapor plumes (SPT stands for south-polar terrain). The scientists theorize that the features here might have been formed by the rotational wobble of this moon of Saturn over time.

Tomorrow we shall take a look at Wednesday’s abstracts at this non-existent conference.