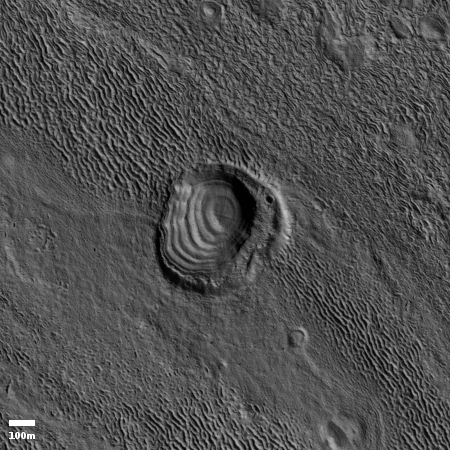 It it time for two cool Martian images from the high resolution camera on Mars Reconnaissance Orbiter (MRO). Though both show features that are similar and likely had some comparable geological origins, they are located in two very different places on Mars and thus also had very different histories.

What makes them fun is how much both resemble classic tall wedding cakes, though the second has unfortunately fallen down and is no longer eatable.

The first, cropped on the right to post here, was taken on May 18, 2020, and is described by the science team as a “Tall Layered Mesa in Crater in Deuteronilus Mensae.” Deuteronilus Mensae is in the transition zone between the northern lowland plains and the southern cratered highlands, and being in the high mid-latitudes (42 degrees north) shows a lot of evidence of buried and eroded glaciers. Many of these glaciers are found inside craters.

What caused this layered mesa however to form is beyond me. It is taller than the crater in which it sits, as well as the surrounding terrain. A glacier would settle into the lowest regions, and would not last if exposed above the rim like this is. Its height suggests that the surrounding terrain was once much higher, and has been eroded away. Yet if so, why does this mesa also sit inside a depression?

The second “wedding cake” is even more intriguing, though less baffling. 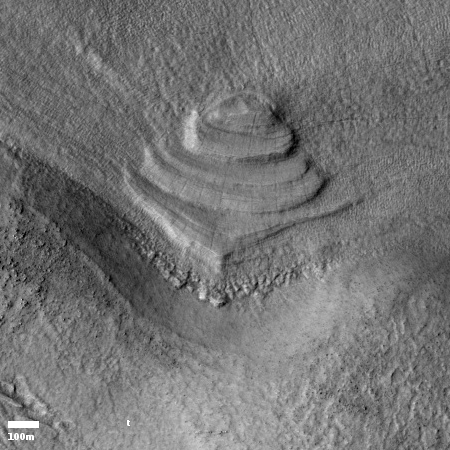 This image, taken on May 13, 2020, shows a section of layered terrain that appears to have separated from the cliff to the south and fallen over so that the layers are now tilted. This event must have occurred a long time ago, as enough erosion has occurred to soften that cliff. Moreover, in the full image we can see that the fallen section is located inside a large channel that has features suggestive of glacial flow that might have pushed that section away from the cliff over time.

This fallen “wedding cake” is also located in the mid-latitudes (37 degrees south), so to find glacial features here is likely. For example, look closely at the debris pushed up against that southern cliff. Looks like glacial debris to me.

The location however is within Hellas Basin, what I call the basement of Mars because it has the lowest elevation on the planet. Hellas has a lot of strange layered features, the origin of which are still being debated. Wind certainly played a part in forming these layers, but so could have either water or ice.