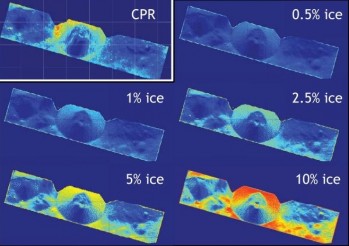 New results from the radar instrument on Lunar Reconnaissance Orbiter (LRO) has found evidence of water-ice on the slopes of Shackleton Crater, located at the Moon’s south pole. The paper, published on Saturday in Geophysical Research Letters – Planets, suggested that about 5 to 10 percent of the weight of the material on the slopes of the crater is comprised of water ice, to depths of 6 to 10 feet.

The box on the upper left in the image to the right shows the data from a radar sweep of the crater taken on April 18, 2010, and compares that to five computer models. As you can see, the data here most closely matches the 5% ice model. Two other sweeps showed similar results.

The water-ice, if there, is not in slabs of ice, as sometimes portrayed in the press, but would be mixed into the Moon’s regolith, or “topsoil”, and would have to be processed out like ore to be useful. Or to quote the paper’s conclusion:

The fundamental conclusions made with high resolution, ground based radar of Shackleton remain unaltered — that no large-scale, meters thick ice deposits are evident within the crater. Rather, Mini-RF data are consistent with roughness effects or with a small percentage of water-ice deposits admixed into the uppermost 1-2 meters of silicate regolith within Shackleton, possibly accounting for the observations made by the Clementine bistatic experiment.

First, for reasons that no one yet understands, this evidence for water in Shackleton appears only on the crater slopes, not on the crater floor. As lunar scientist Paul Spudis noted to me in an email, “We’ve known for some time that ice on the Moon is patchy and heterogeneously distributed. It occurs in some places (and not in others) for reasons that remain unclear.” For example, while no evidence of water has been found on the floor of Shackleton, other craters floors do show evidence of water.

Second, if this data is correct, the amount of water in Shackleton should be substantial. “For a 20 km diameter crater,” Spudis added, “that corresponds to about 30 million cubic meters of ice.”

Third, and less hopeful, the radar data can also be explained by surface roughness, not water ice. As noted in the paper,

The totality of these characteristics is consistent with the downslope movement of material causing higher than average decimeter-scale surface roughness on the crater walls than is present in the average mature regolith that develops on flatter surfaces.

In other words, the natural roughness that you would expect to see on the slopes of a crater — as material periodically tumbles downward — might account for the radar data, not the presence of water.

Finally, is this data inconsistent with the recent LEND results that suggested much less water on the Moon than previously thought? Not necessarily. LEND did find evidence for water in some areas, though the data released did not focus on Shackleton.

I must admit that though this data would suggest there is a good amount of water in Shackleton, the fact that it is located on the slopes worries me. Also puzzling is how the evidence of water does not correspond with the permanently shadowed areas. The slopes are in permanent shadow, but so is the floor of the crater. Why is there no evidence of water on the floor?