“We choose to go to the Moon.”

September 12, 2012 at 5:01 am Robert Zimmerman Essays And Commentaries 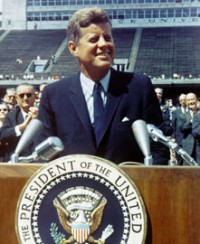 Fifty years ago today, John Kennedy gave a speech at Rice University in Texas, outlining his reasoning behind his proposal that the United States send a man to the Moon before the end of the decade. The key phrase:

But why, some say, the Moon? Why choose this as our goal? And they may well ask why climb the highest mountain? Why, 35 years ago, fly the Atlantic? Why does Rice play Texas?

Video below the fold. The full text can be found here. (Interesting sidebar: When I posted Monday’s evening pause that quoted this speech I hadn’t realized the 50th anniversary of the speech was this week!)

This speech is worth watching, in full, if only to see the passion of both Kennedy and the audience for what he says. It also reveals a somewhat higher level of sophistication coming from a politician than one would see nowadays. Kennedy not only understood the deeper philosophical reasons for exploration, his thoughts were grounded in history as well as recent events, all of which he referenced repeatedly.

Both Obama and Romney can give rousing speeches, but often the reasoning is shallow, the facts are scant, and the proposals are empty. Watching them I often find myself bored, because they really don’t say anything.

Kennedy however talked substance, outlining in detail the recent achievements in space as well as the specific expected knowledge that this effort would bring. And in retrospect, he has been proven one hundred percent correct. Moreover, he was not offering the American people a benefit or government program that would aid them directly, like an entitlement program or free healthcare, but instead proposing something that would initially cost them quite a lot. And the audience ate it up, thrilled and enthusiastic to make that sacrifice for the possibilities it offered to future generations.

In fact, the reaction of the audience — and the nation — to Kennedy’s proposal contrasts very sharply with modern society. Then, the words from Kennedy’s inaugural address resonated.

Kennedy had proposed that his 1960s society make a sacrifice so that humans could go to the Moon. He did it with the belief that this sacrifice would result in concrete benefits for later generations, but not necessarily his own. His audience understood this, and accepted that trade-off gladly. To them, doing something grand, difficult, and expensive was worthwhile because they believed it would make their children’s lives better.

What has our generation done instead? For the past three decades the words of Kennedy’s inaugural address have been reversed. Rather than making sacrifices for the future, we make demands from our country that act to destroy that future. We demand healthcare and unemployment benefits and all kinds of other entitlements, most of which society cannot afford. The result since the late 1970s has been for city, state, and federal governments to spend money we don’t have, and that later generations will have to pay back, so that we today can have it easy.

And when any politician has dared to suggest we make even a small sacrifice so that we can stop bankrupting our children’s future, the howls of outrage are deafening. Witness the teachers strike in Chicago for example.

Somehow, we have got to return to that early 1960s mentality, of a willingness to sacrifice ourselves for the future, if we are to save our country from financial collapse. And I pray that the tea party movement and the 2010 elections are a sign that this is happening.

We shall find out in November.