1st pictures from Zhurong finally released
May 19, 2021 9:09 am Robert Zimmerman 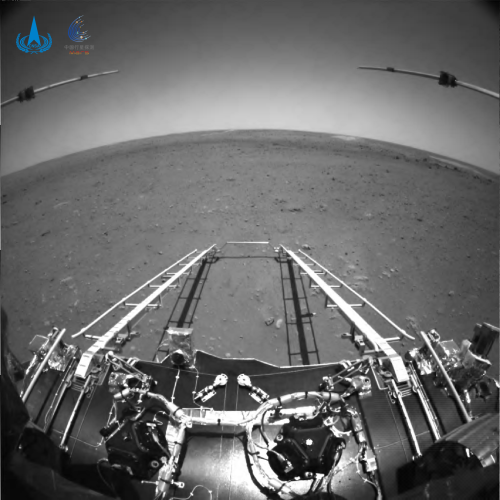 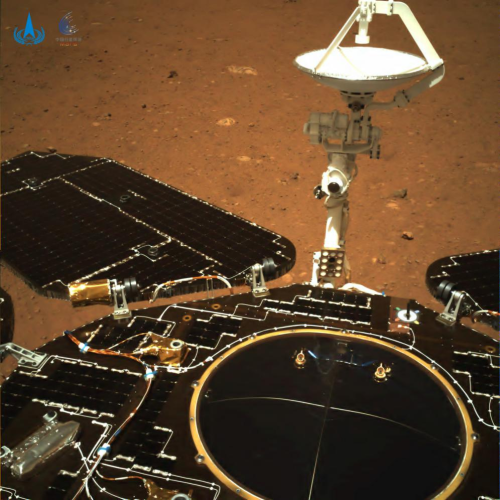 China today finally released the first images from its Mars rover Zhurong, proving that the rover landed successfully and is operating as planned. The link takes you to the website of the Chinese space agency, in Chinese. This link provides some details in English.

The two images to the right show the front and rear views from Zhurong, sitting on top of its landing. The black & white front view shows the deployed ramps that the rover will roll down when it begins it operational phase. It shows, as expected, the generally flat terrain of the northern lowlands plains of Utopia Planitia. In the distance however there appears to be distinct features, possibly the rim of a small crater. At the moment the exact location of the rover is not known, so no precise map yet exists of its surrounding terrain. This will change in the coming days as both Chinese and American scientists hone in on the rover using orbital images.

The color rear view shows that the rover’s solar panels and high gain antenna have properly deployed. While the design of Zhurong in many ways imitates the two American rovers Spirit and Opportunity (probably because China hacked into the JPL website for several years and downloaded their blueprints), it also includes several upgrades. For example, Zhurong’s solar panels unfold, providing a significantly larger surface area to gather sunlight. Both Spirit and Opportunity were somewhat hampered by the power they could obtain by their smaller solar panels. Both also experienced times when Martian dust on the panels reduced that power. Zhurong’s much larger panels will protect it better from these issues, and could allow it to survive longer on Mars.