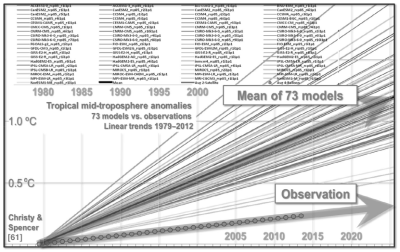 The uncertainty of science: A simple climate model [pdf], designed to run on a calculator and not relying on the premise that man-made carbon dioxide is causing global warming, appears more accurate at predicting the climate than the high-powered supercomputer models of the IPCC.

The current climate models fueling belief in manmade global warming do have fairly good “fit” to the data on which they were tested. However, the predictivity isn’t that great – see the recent warming “pause” or have a look at the figure above. They’re also hella complex, requiring thousands of hours of supercomputer computations.

Early this year, Christopher Monckton of Brenchley, Willie Soon of the Harvard-Smithsonian Center for Astrophysics, David Legates of the University of Delaware, and Matt Briggs, “Statistician to the Stars” and sometimes PJM contributor, published a paper in Science Bulletin (the Chinese equivalent of Science) entitled “Why models run hot: results from an irreducibly simple climate model”.

They took a different approach. Observing the issues with the current climate models, they constructed a very simple model working from first principles. “Irreducibly” here means “it can’t get simpler and reflect basic physics.” … This model is about one step advanced from a “back of the envelope” calculation, since it requires taking a natural logarithm as well as some multiplication, but it’s easily done with a scientific calculator — or even a slide rule.

But it models actual temperature observations better than the complex models. [emphasis in original]

The figure on the right is from the new Monckton paper, and shows the utter failure of every complex global-warming climate model to predict the global climate for the past 35 years. Whether this new very simple model is more accurate than these supercomputer models, however, remains to be seen, but their work definitely points out the uncertainty and failure of the present theories to explain the climate. They simply don’t do so, and thus are not a useful tool for gauging what we should do about the climate, if anything. As the writers of the simple model conclude,

The general-circulation models now face a crisis of credibility. Not one of them predicted a stasis of as long as 18 years 6 months in global temperatures. Indeed, it is often stated that periods [greater than] 15 years without warming are inconsistent with models’ predictions. For instance, [two IPCC papers] state: ‘‘The simulations rule out (at the 95 % level) zero trends for intervals of 15 year or more, suggesting that an observed absence of warming of this duration is needed to create a discrepancy with the expected present-day warming rate’’.

The models relied upon in [the IPCC reports] predicted twice as much warming from 1990 to 2014 as has been observed. All models predicted a warming rate in the crucial tropical mid-troposphere considerably in excess of observation. It is no longer credible to ignore these ever-widening discrepancies between prediction and observation. IPCC itself has recognized that, at least as far as medium-term prediction is concerned, the models have failed, raising the legitimate question whether the longer-term predictions may also have been exaggerated, perhaps as greatly as the medium-term predictions.

As I say over and over again, the science of climate is incredibly complex and uncertain. No one yet understands fully how the Earth’s climate functions, and anyone who claims they do is either an ignorant fool or an outright liar. Keep that in mind as this presidential election cycle unfolds and candidates are challenged by the mainstream press (made up mostly of ignorant fools and outright liars) to comment on man-made global warming.