A decade of changes at the Martian south pole
April 3, 2019 1:54 pm Robert Zimmerman

The image above, cropped, reduced, and annotated to post here, was released this week by the Mars Reconnaissance Orbiter (MRO) team. It shows the changes that have occurred at one location at the Martian south polar cap in the past decade. As planetary geologist Alfred McEwen wrote,

The south polar residual cap of carbon dioxide ice rapidly changes. This image was planned as an almost exact match to the illumination and viewing angles of a previous one we took in August 2009.

The pits have all expanded and merged, and we can just barely see the patterns in the 2009 image compared to this January 2019 picture. The 2009 image is also brighter and bluer, with more seasonal frost and/or less dust over the surface. These images were both taken in late southern summer, but our 2019 picture is slightly later in the Martian season by about two weeks.

You can get a better idea how much is changed by seeing the full image from which the above small area was cropped. 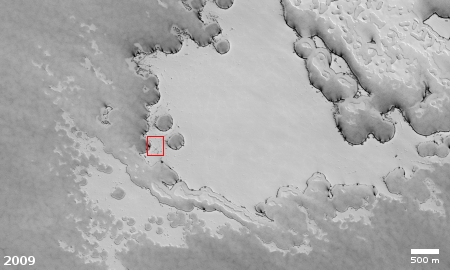 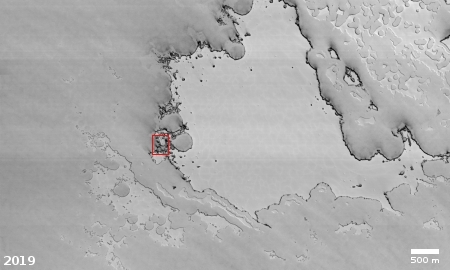 To the right is the 2009 image, reduced, rotated, and annotated by me. The red box indicates the small area covered by the above image. South is to the right. The many circular features probably indicate craters buried below the cap.

Below and to the right is the full 2019 image, rotated and cropped by me to match the 2009 image. The widespread differences are obvious. All of the white smooth areas have shrunk. New spots have appeared in those white areas, also suggesting the existence of buried craters.

The mystery here is that these images were both taken at almost the same moment in the late southern summer, though about five Martian years apart. Why should the white areas have shrunk? We would expect a reduction from winter to summer, but these were both taken in summer. While it would make sense to see changes, with some areas growing and others shrinking, we should expect to see about the same amount of white area.

Instead we see shrinkage only. Why? The only simple solution I can come up with that maybe these images simply don’t cover enough territory to provide us the full picture. The white areas, which are probably either frost or dry ice, have shrunk here, but grown in adjacent areas beyond this image.

Or maybe Mars has too many SUVs, and is now experiencing global warming! Yeah, that’s the answer! Nothing else make sense! The science is now settled. And if you disagree with me you must be a homophobic, white supremacist fascist, racist!