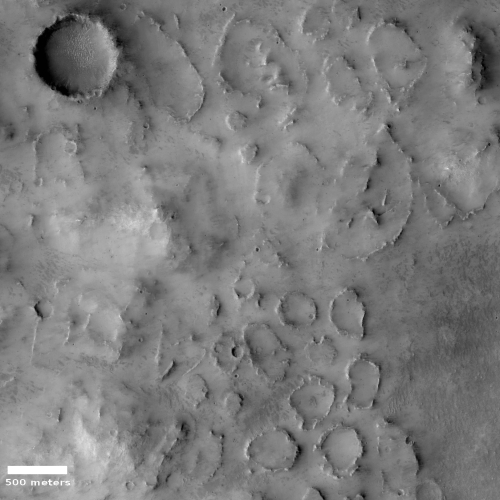 Cool image time! The photo to the right, cropped and reduced to post here, was taken on August 9, 2020 by the high resolution camera on Mars Reconnaissance Orbiter (MRO). Uncaptioned, the image is merely dubbed a “knob field.”

I won’t spend much time trying to explain this geology. It might be related to pedestal craters, but these ridges and mesas don’t really look like those features, since they don’t really stand above the surrounding terrain.

Maybe they are a very ancient field of craters long buried, now partly exposed due to erosion, but also partly buried by wind-blown Martian sand and dust. Once again, that many of their shapes don’t resemble craters discounts this explanation.

The location of this photo is in the southern cratered highlands, as shown by the black cross in the overview map below. 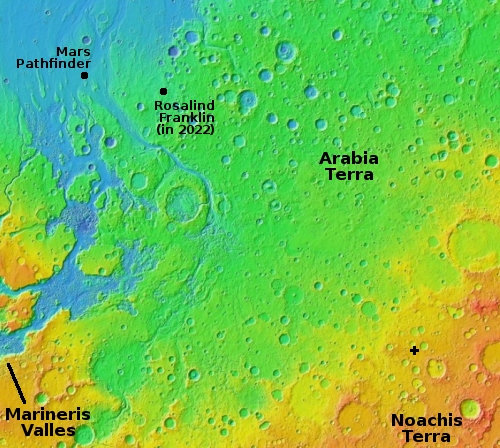 Noachis Terra, with its many craters, is considered some of the oldest terrain on Mars, formed during the Late Heavy Bombardment period about 4 billion years ago when the planets in the inner solar system were consolidating by incessant impacts from the crowded debris disk surrounding the Sun. This history favors an impact explanation.

This particular feature is also likely located in a very dry place on Mars, at 15 degrees north latitude close to the equator. Since pedestal craters are thought to form when an impact lands on what was once an icy plain — which subsequently sublimated away to leave the crater above the surrounding terrain — it is unlikely that explains these features. Noachis Terra was probably never an icy plain, though it would be a mistake to rule this out completely. Over Mars’ long history, with its wildly swinging rotational tilt, ice could have once been here.

In the end, we simply could be looking at the remains of some geological feature that was created by processes we can’t guess at with the data available. To get an answer will require some digging, either here on Earth (to find research papers on the subject) or on Mars, at the location itself. The former is possible. The latter is years in the future.