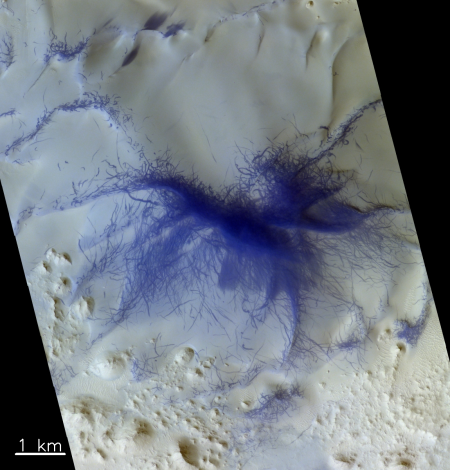 A bunch of cool images! The European Space Agency (ESA) today released more than a dozen Martian images taken by the camera on its Trace Gas Orbiter spacecraft.

In addition to a snapshot of InSight and its landing area, “The images selected include detailed views of layered deposits in the polar regions, the dynamic nature of Mars dunes, and the surface effects of converging dust devils.” The release also included images showing details of two of Mars’ giant volcanoes, Olympus Mons and Ascraeus Mons.

The image I have highlighted to the right, reduced to post here, shows a spot on Mars where for some unknown reason dust devils love to congregate.

This mysterious pattern sits on the crest of a ridge, and is thought to be the result of dust devil activity – essentially the convergence of hundreds or maybe even thousands of smaller martian tornadoes.

Below is a side-by-side comparison of this image (on the right) with a Mars Reconnaissance Orbiter (MRO) image taken in 2009 (on the left).

It is plainly obvious that there has been a lot of dust devil activity at this one spot over the past decade. While numerous tracks have been added to the south of the ridge, the tracks on the ridge’s northwest have faded.

Why dust devils leave so many tracks here remains a mystery. The ridge is in the center of a large crater, and probably is part of that crater’s central peak. The link suggests that atmospheric conditions involving the change in elevation at the ridge might play a part, but how is not really understood. You don’t see this dust devil gathering along most other ridges on Mars.

Today’s image dump demonstrates that Trace Gas Orbiter is ready to provide support, both visually as well as a communications satellite, for both InSight and Europe’s 2020 rover, Rosalind Franklin. That ESA waited to release all these images in one batch, however, rather than one at a time over several months, only illustrates their complete lack of understanding about how to do good publicity. Released bit-by-bit they could garner more attention, over a longer period of time. Dumped all at once they gain only a one time burst of attention.