A gravel pile floating in space that might hit the Earth
June 19, 2020 2:10 pm Robert Zimmerman 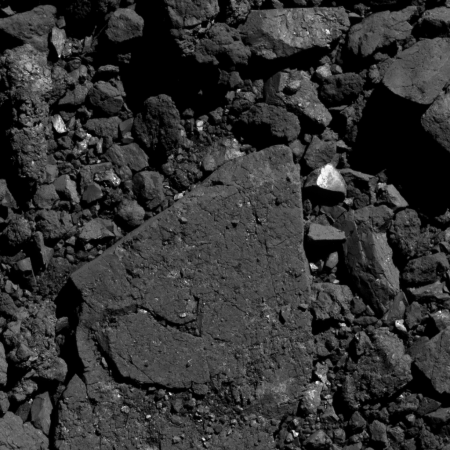 Come October the probe OSIRIS-REx will attempt a quick touchdown on the asteroid Bennu to grab some tiny particles, all smaller than 0.8 inches across.

Bennu is what scientists have described as a “rubble-pile” asteroid. They use that name because it is simply a conglomeration of a lot of rocks, pebbles, boulders, and stones, all jagged and of all sizes. The overall gravity has never been strong enough to squeeze them together, at least as far as we can see, and so they are piled up loosely across the asteroid’s surface wherever we look.

I think a better name for this asteroid would a floating gravel pile, since the material on it, as clearly shown in the image to the right (reduced and rotated to post here), more resembles the tailings one finds at a mine or quarry. This photo was taken by OSIRIS-REx on May 26, 2020 during its first dress rehearsal over its back-up touch-and-go sample grab site, Osprey. As the release caption notes,

I have rotated the image 90 degrees so that east is up, because the full mosaic of the entire Osprey landing site, shown below, is oriented that way, and by rotating it to match it is easier to locate this image within it. 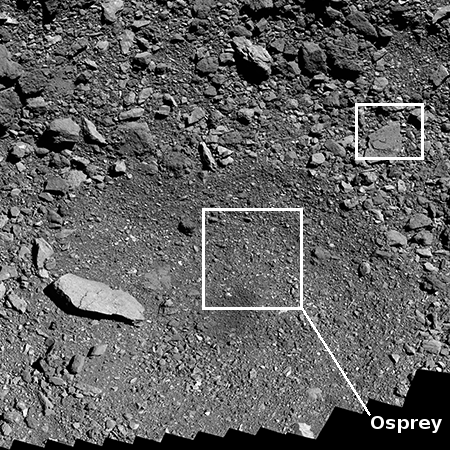 The box to the upper right of Osprey shows this flat rock. As you can see, the OSIRIS-REx engineering team does not plan to put the spacecraft anywhere near this flat rock when they attempt their sample grab.

Nonetheless, this image illustrates the gravelly nature of Bennu, and the difficulties these engineers face in successfully grabbing a sample. They need particles smaller than three-quarters of an inch. This image helps give us some scale. As they note, the bright white rock is about a foot across. If you look in Osprey itself you will see numerous rocks of similar size. Even though it is an area of smaller pebbles and stones with more material in the tiny size range required for the sample grab, the site is still filled many rocks far larger. 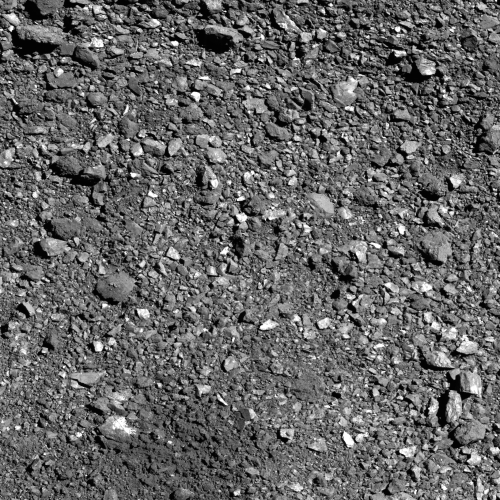 The photo to the right is taken from the full resolution mosaic of Osprey [a very large file], and focuses specifically on the Osprey back-up site.

Many of the rocks in this close-up can easily be seen in the mosaic above, and are clearly the same size as that white rock in the first image. Thus, Osprey is filled with many foot-sized pebbles, each one of which could seriously damage OSIRIS-REx should they jump from the surface during contact and hit the spacecraft.

The image however tells us a lot more about these gravel pile asteroids. They truly are like the tailings from mines, lots of stones barely held together by the asteroid’s truly tiny gravitational field.

Bennu is considered a potentially dangerous asteroid. Its orbit is such at there is a very tiny chance (less than 1 in 2,700) that it will hit the Earth late in the next century. What OSIRIS-REx has shown us, however, is that though the asteroid is 1,600 feet across with a mass of about 85 million tons, if it should cross paths with the Earth a large percentage of it, possibly almost all, will break apart and burn up in the atmosphere before hitting the ground.

At the same time, we know as yet little about the asteroid’s interior. While present data suggests the asteroid is 20 to 40 percent empty space, there still could be buried beneath its gravel pile surface much larger structurally sound pieces that could barrel their way through the atmosphere and smash into the ground.

To find out, we need to learn how to safely and accurately map its interior. Only then will we know if Bennu is truly a threat, or simply a vehicle for providing some future generation on Earth a truly spectacular fireworks show.