A hint of unexpected fresh ice on Enceladus
September 18, 2020 11:53 am Robert Zimmerman 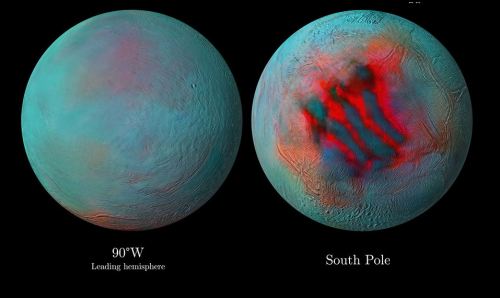 Using data collected by Cassini while it orbited Saturn for thirteen years, scientists have found that there might be more relatively fresh ice on the surface of the moon Enceladus than previously believed.

Cassini scientists discovered in 2005 that Enceladus – which looks like a highly reflective, bright white snowball to the naked eye – shoots out enormous plumes of ice grains and vapor from an ocean that lies under the icy crust. The new spectral map shows that infrared signals clearly correlate with that geologic activity, which is easily seen at the south pole. That’s where the so-called “tiger stripe” gashes blast ice and vapor from the interior ocean.

But some of the same infrared features also appear in the northern hemisphere. That tells scientists not only that the northern area is covered with fresh ice but that the same kind of geologic activity – a resurfacing of the landscape – has occurred in both hemispheres. The resurfacing in the north may be due either to icy jets or to a more gradual movement of ice through fractures in the crust, from the subsurface ocean to the surface.

The image above, cropped, reduced, and rearranged to post here, shows two views of Enceladus. On the left we are looking at one hemisphere, with the south pole at the bottom. On the right we are looking straight down at the south pole. The red areas are where scientists think there is relatively fresh ice. While the new ice is very pronounced at the south pole, where the tiger-striped vents have been found, the northern ice is much less evident, though clearly there.

That northern fresh ice however might not come from the planet’s interior, as suggested by the press release. It might also be new ice deposited from space that came from those very active tiger stripes. At the present time the data doesn’t allow for any solid conclusions.