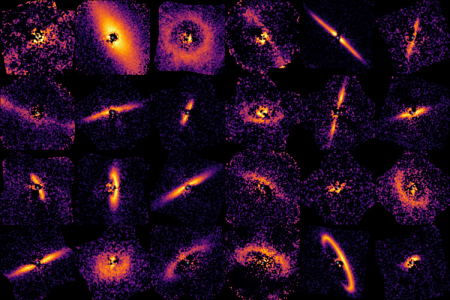 Worlds without end: Astronomers this month released a large collection of images taken during the past four years by the Gemini South Telescope in Chile of young stars that also have debris disks and are likely solar systems in the process of forming.

The image to the right, reduced slightly to post here, is only a sampling of the 26 disk systems found out of 104 young stars photographed. Go to the link to see some higher resolution examples.

Of the 26 images of debris disks obtained by the Gemini Planet Imager (GPI), 25 had “holes” around the central star that likely were created by planets sweeping up rocks and dust. Seven of the 26 were previously unknown; earlier images of the other 19 were not as sharp as those from GPI and often didn’t have the resolution to detect an inner hole. The survey doubles the number of debris disks imaged at such high resolution.

“One of the things we found is that these so-called disks are really rings with inner clearings,” said Esposito, who is also a researcher at the SETI Institute in Mountain View, California. “GPI had a clear view of the inner regions close to the star, whereas in the past, observations by the Hubble Space Telescope and older instruments from the ground couldn’t see close enough to the star to see the hole around it.”

The data strongly confirms most theories about planet formation in these debris disks, as one of the youngest stars did not have any gaps in its disk, suggesting no larger bodies had yet formed to clear out a region.