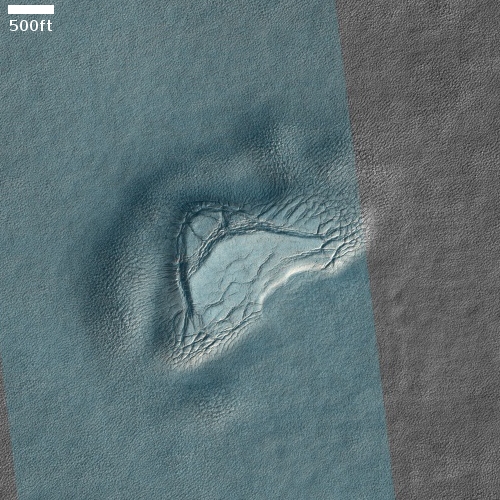 Today’s cool image to the right, cropped to post here, is a fine example of Haldane’s words. It was taken on January 15, 2021 by the high resolution camera on Mars Reconnaissance Orbiter of a single lone mesalike feature sticking up in a flat expanse of Mars’ south polar dry ice/water ice cap.

I emailed Shane Byrne of the Lunar and Planetary Lab University of Arizona, who had requested the photo, to ask him what he thinks we are looking at. His response:

This region has a thick layer of CO2 ice sandwiched between water ice that’s above and below. CO2 ice is denser than water ice so I think a fragment of water ice of the underlying layer has risen up through the denser CO2 ice that covers this area (what geologists call a diapir).

Byrne also admits this remains merely “just a wild theory,” not yet confirmed.

Assuming this theory to be right, in a sense then this mesa is not really a mesa at all but an iceberg of water, floating not in a saltwater liquid ocean as on Earth but on a frozen sea of dry ice. Talk about queer! The wider shot below, taken by MRO’s context camera, illustrates how isolated this water iceberg is on that dry ice sea. 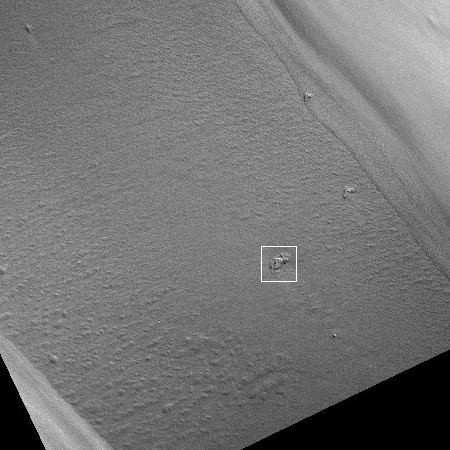 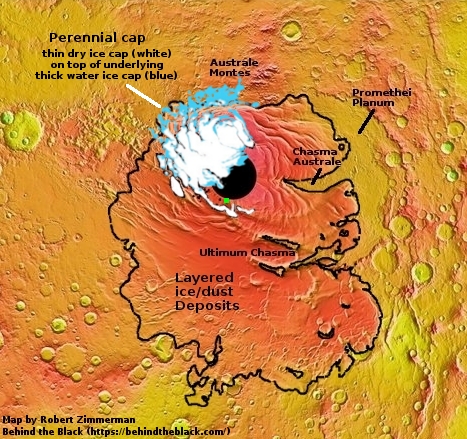 The white box marks the area covered by the photo above, and shows how this bulging iceberg of water ice is one of only a handful on this wide expanse of flat dry ice. Even though the water ice below is lighter than the dry ice that covers it, in most cases the dry ice is structurally strong enough to hold that water ice down, with only a few breaks in its mantle.

For both images south it to the top. The two whiter areas to the northeast and southwest of the dry ice sea in the context photo are probably an additional seasonal layer of CO2, deposited during the winter and now sublimating away because it is now summer. You can see a third small mesa that has broken through the permanent dry ice cap as well as the seasonal dry ice mantle to the northeast.

The overview map to the right gives the larger context. The green dot marks the location of this image. It is one of the closest to the pole that MRO has taken (though not the closest). Though the map suggests this picture is on the layered ice/debris deposits, not the perennial cap of dry ice on top of water ice, the map’s resolution is not that precise. This close to the pole there are plenty of patches of that perennial cap that extend past the marked areas shown on the map.

The reason that there is a black hole surrounding the pole is for engineering reasons. As Byrne explained,

The spacecraft orbit only goes up to latitudes of 87 degrees north and south. To see closer to the poles we roll to one side as we pass by. The maximum spacecraft roll we can do in normal operations is 30 degrees. At the north pole that’s enough for us to see all the way to the pole itself. At the south pole we don’t quite make it because the spacecraft and ground are closer together there.

Though there are some high resolution images inside that black hole, the engineering requirements limit the number. Today’s photo is right at the limit where no special engineering maneuvers are required.