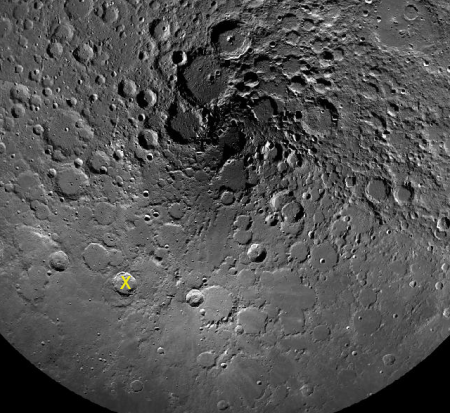 In reviewing Lunar Reconnaissance Orbiter data scientists think they have discovered several skylight entrances into a lava tube that is located near the Moon’s north pole.

The new pits were identified on the northeastern floor of Philolaus Crater, a large, 43 mile (70 km)-diameter impact crater located at 72.1oN, 32.4oW, about 340 miles (550 km) from the North Pole of the Moon, on the lunar near side. The pits appear as small rimless depressions, typically 50 to 100 feet across (15 to 30 meters), with completely shadowed interiors. The pits are located along sections of winding channels, known on the Moon as “sinuous rilles,” that crisscross the floor of Philolaus Crater. Lunar sinuous rilles are generally thought to be collapsed, or partially collapsed, lava tubes, underground tunnels that were once streams of flowing lava.

“The highest resolution images available for Philolaus Crater do not allow the pits to be identified as lava tube skylights with 100 percent certainty, but we are looking at good candidates considering simultaneously their size, shape, lighting conditions and geologic setting” says Pascal Lee, planetary scientist at the SETI Institute and the Mars Institute who made the new finding at NASA’s Ames Research Center in Silicon Valley.

…Prior to this discovery, over 200 pits had been found on the Moon by other researchers, with many identified as likely skylights leading to underground lava tubes associated with similar sinuous rilles. However, today’s announcement represents the first published report of possible lava tube skylights in the Moon’s polar regions.

The floor of the crater as a lot of rilles, and a close look at that crater floor reveals to me a lot of possible sky light entrances, more than indicated by the images at the llink. (Go here, click on projections and pick “Orthographic (North Pole).” Then zoom in on the crater indicated by the yellow X in my image on the right above.)

The key here is that caves or lava tubes provide a good place to cheaply and quickly establish a lunar colony. While it is suspected that water might survive in permanently shadowed regions near the poles, up until now no one had found any good underground locations there. If this suspected skylight entrances prove true, this crater then becomes prime real estate on the Moon.