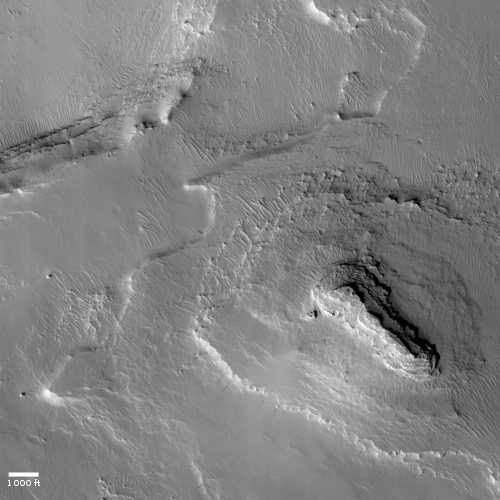 Cool image time! The photo to the right, rotated, cropped, and reduced to post here, was taken on September 8, 2020 by the high resolution camera on Mars Reconnaissance Orbiter (MRO). It shows an outstanding terraced butte that would rival any of the similar buttes scattered throughout the Grand Canyon, and is reminiscent especially of Wotans Throne.

What makes this butte intriguing are its terraces, the obvious result of the repeated deposition of new layers across the surface over time, and now exposed by erosion. What caused them?

As always, location provides the clues. First, this butte is found at about 15 degrees north latitude in the vast Arabia Terra transition region between the Martian northern lowland plains and the southern cratered highlands. At that latitude, we are not looking at any recent glacial features. While there might have been ice here once, it hasn’t likely been present, either on the surface or underground, for a very long time.

This conclusion becomes important once we look at the wider photo below, taken by the high resolution camera on the European orbiter Mars Express. This image gives us the immediate context. 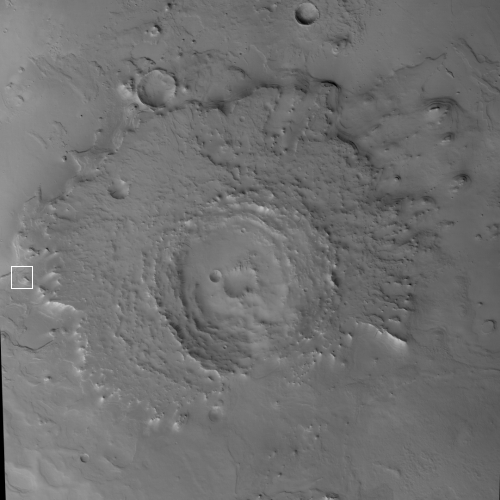 The white box indicates the area covered by the MRO image above. At first glance, this butte sits at the western edge of what appears to be the splattered ejecta field from a large impact. The spatter field itself, from east to west, is about fifty miles wide, making the crater itself about 20-25 miles across.

The problem with this theory is that any crater impact is instantaneous, and would not lay down the layers we see here. In fact, the interior walls of the crater seem to reflect the same layers seen at the edge of the splatter field, suggesting that the layers were there before the impact.

A more likely theory is that this impact crater is not an impact crater at all, but the caldera of a shield volcano, with the splatter field and its layers representing multiple eruptions over a long time period. 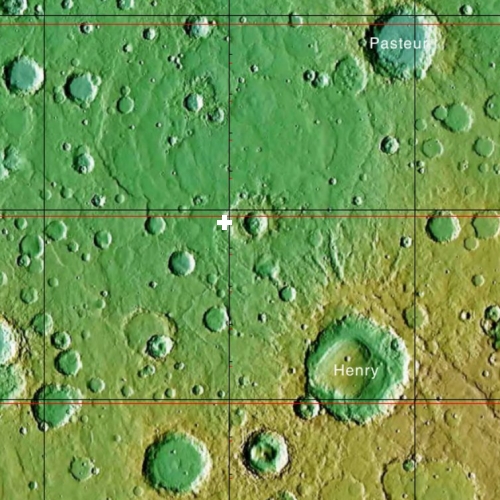 Because the crater is unnamed I could not find any research papers discussing its origin. The map to the right is a section from the Arabia quadrangle covering this part of Mars, with the white cross indicating the location of today’s cool image. This location is on the high edge of Arabia Terra, close to the cratered highlands. The downward grade is to the northwest, and is suggested by the flow patterns down from Henry Crater and surrounding our subject crater.

This wider image suggests another possibility. Could the layers have been laid down by those flow patterns coming down from Henry Crater? The impact that created this crater would have squeezed those flows, thus making them more resistant to the erosion that exposed this butte and its surrounding terraces.

I am skeptical of this last theory, since the impact would have also distorted those layers far more than they appear to be. If I had to choose, I’d pick a shield volcano. That none of the other craters in this region have similar splatter fields, reinforces that choice, since it suggests a different origin for this particular crater compared to the others.

I also would not place any money on that choice.