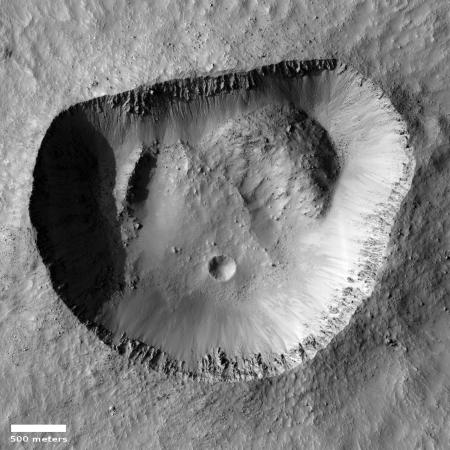 Cool image time! The image to the right, cropped and reduced to post here, was released today by the science team of the high resolution camera on Mars Reconnaissance Orbiter (MRO). It shows a small Martian crater whose northern rim for some reason is flattened into a straight line. Such a crater is rare, since almost all craters rims are round, even in the case of a low angle impact. The cause is unknown, though there are theories. From the caption, written by Ingrid Daubar of the Lunar and Planetary Laboratory in Arizona:

One possibility is that there was a zone of joints or faults in the crust that existed before the impact. When the impact happened, the crater formed along the straight line of these faults. Something similar happened to Meteor Crater in Arizona. Our image doesn’t show any faults, but they could be beneath the surface.

Perhaps some sort of uneven collapse changed the shape of the crater. There are piles of material on the crater’s floor, especially in the northwest and northeast corners. If those piles fell down from the rim, why did it happen there and not in other places? This crater is near the size where larger craters start to show wall slumping and terraces, so this type of collapse could be occurring unevenly.

The crater is located in the southern cratered highlands of Mars, at about 32 degrees latitude. At that latitude, it is also possible that some past glacial activity could have misshapen this crater, though I have no idea how. The crater itself does not appear to have any glacial material in it.