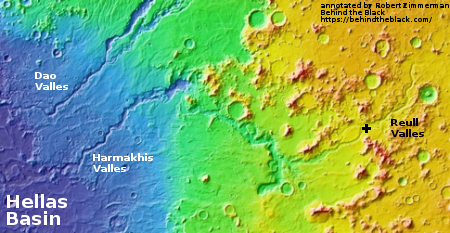 Today’s cool image focuses in on a Mars Reconnaissance Orbiter (MRO) uncaptioned photograph taken of the valley floor of Reull Vallis, a meandering canyon that drains into Hellas Basin, the bottom of Mars.

The image on the right is not that photograph. Instead, it is an overview of the area surrounding it. The image location is indicated by the black cross, dead center within the floor of Reull Vallis itself. This valley, as well as Dao and Niger to the northwest but lower in elevation are all thought to have been formed from flowing water, all of which apparently drained from the east and to the west into Hellas Basin.

This last detail is very important and bears repeating before looking at today’s subject image. The river that formed Reull Vallis flowed from the east to the west. Now for that picture. 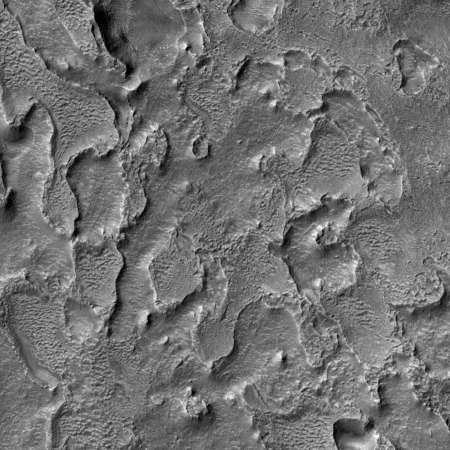 The cropped image on the left, slightly reduced to post here, shows the middle section of the full photograph, but it is typical of the entire image. What we have is a complex pattern of sharp curving ridges with depressions meandering in all directions. There is absolutely no indication that a river once flowed across this surface from the east to the west. None.

Other images of Reull Vallis do show this flow pattern. At this location, however, where the valley floor appears to be particularly wide, that flow pattern vanishes and is replaced by this helter-skelter terrain, illustrating what the planetary geologists readily admit: “The morphology of Reull Vallis suggests it had a long and complex history, including subsurface and surface movement of fluids followed by extensive modification by mass wasting.”

Here we see that the floor has been significantly eroded by later processes after the water disappeared. Later, wind action, which probably contributed to that erosion, also placed dust and dunes within the depressions here.

A lot of time has passed since that river flowed through Reull Valles. Or to put it another way, Mars has generally been a very dry place for a very long time. It might have considerable water at its poles as well hidden in an underground ice aquifer, but its surface is far drier than any desert on Earth, and has been for eons.

Future settlers need to recognize this. It will determine everything they do to establish a life here.