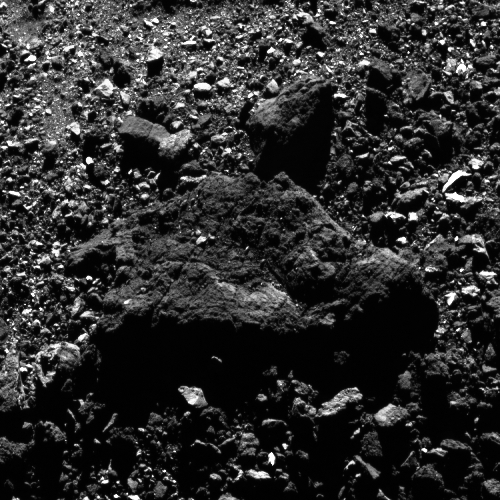 Cool image time! The OSIRIS-REx science team today released a close-up image of the surface of the asteroid Bennu. The image on the right is a cropped and rotated section of that image, focusing on the image’s star, its largest rock.

The boulders on Bennu’s surface sport a variety of surface textures, from smooth, to hummocky, striated, and crumbly “cauliflower” in nature. The large boulder in the image center is ~92 ft (~28 m) across and has a somewhat round shape, though many smaller boulders surrounding it are very angular. Some of these appear to be fragments that may have disaggregated from the central boulder and display layering effects that may reflect some of the properties of their mineral composition. Other boulders show signs of surface exfoliation and fractures that may have been caused by impacts, mechanical weathering, and other forms of rock breakdown active on Bennu’s surface.

The image was taken from less than a mile away, and shows a spot near the asteroid’s south pole.

Why the larger boulder has a rounded look, but the pebbles around it are jagged, is a puzzle.

The science team also revealed today that they have detected plumes of particles being released from the asteroid’s surface. They have also found Bennu to present them with the same problem faced by the Hayabusa-2 team at Ryugu: The asteroid is far rougher than expected.

The higher-than-expected density of boulders means that the mission’s plans for sample collection, also known as Touch-and-Go (TAG), need to be adjusted. The original mission design was based on a sample site that is hazard-free, with an 82-foot (25-meter) radius. However, because of the unexpectedly rugged terrain, the team hasn’t been able to identify a site of that size on Bennu. Instead, it has begun to identify candidate sites that are much smaller in radius.