A young lunar impact crater
November 21, 2018 at 9:57 am Robert Zimmerman Points of Information 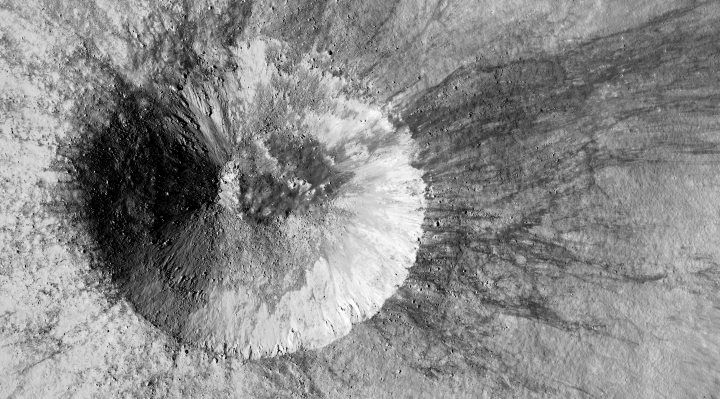 The unnamed crater, just 1.8 kilometers across, is too small to see from Earth with unaided eyes. It is in the Moon’s wild west, just past Oceanus Procellarum and close to the line dividing the nearside from the farside, so it would be hard to glimpse in any case. If you stood on the crater rim, you would see the Earth forever slowly bobbing up, down, and sideways close to the eastern horizon.

The image above is a cropped and reduced-in-resolution section of the released image. If you click on it you can see this section at full resolution.

What I find fascinating about this crater are the black streaks that appear to only run down the outside slopes of the eastern rim, but nowhere else. At first glance it looks like prevailing winds, blowing from the west, caused this, but of course that’s wrong because the Moon has no atmosphere. The website explains:

Notice the thin dark streamers of late-stage ejecta — material the small asteroid that excavated the crater lofted at a steep angle, so that it soared high and landed last, drawing fine lines on the just-deposited bright ejecta near the crater.

In other words, the impact hit the ground from an oblique angle, from the west, throwing up ejecta mostly to the east and thus producing these dark streaks. This does make sense, as research has shown that craters will still form circular pits, even if the impact comes from the side.

The full resolution image is very impressive, as you can zoom in and see many individual boulders. In fact, the interior of the crater is littered with them, With a resolution on the full image of about 16 feet per pixel, many of these boulders are house and mansion-sized, with much evidence of numerous avalanches and landslides within the crater.

Very rough country, indeed. And it gives a sense of the slowness of the lunar erosion processes, caused almost entirely by the solar wind and the tiny rain of micro-meteorites over eons. Though this crater is young, estimated to be about 100 million years old, it still looks fresh and rough. To smooth things out on the Moon will take many more hundreds of millions of years.