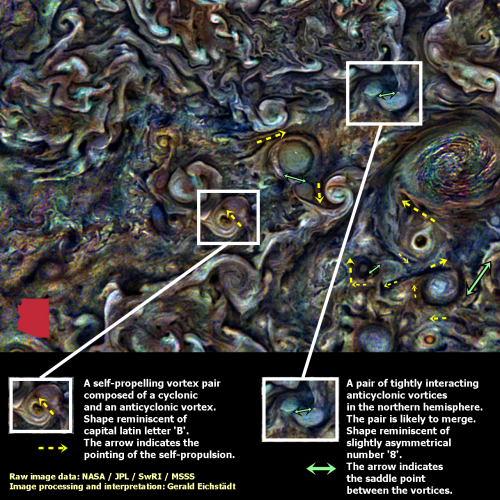 The cool image to the right is another Juno photo of Jupiter enhanced by citizen scientist Gerald Eichstädt. This time Eichstädt also did some analysis of the motions and interactions of many vortices found in the northern polar regions of Jupiter. The image to the right has been cropped and reduced to post here, with the state of Arizona, about 400 by 300 miles in size, added for scale. There is more annotation in the full image.

Large vortices in an atmosphere layer of a rotating planet can be roughly split into two classes, cyclonic and anticyclonic vortices.

Tightly interacting vortex pairs of the same sign tend to merge. More distant like-signed vortex pairs may essentially repel each other. Interacting vortices tend to create filaments, some of which may split into fragments and further collapse into streets of small eddies.

He also notes that in future orbits Juno will provide closer views of this stormy region, as with the orbit the closest point shifts northward.