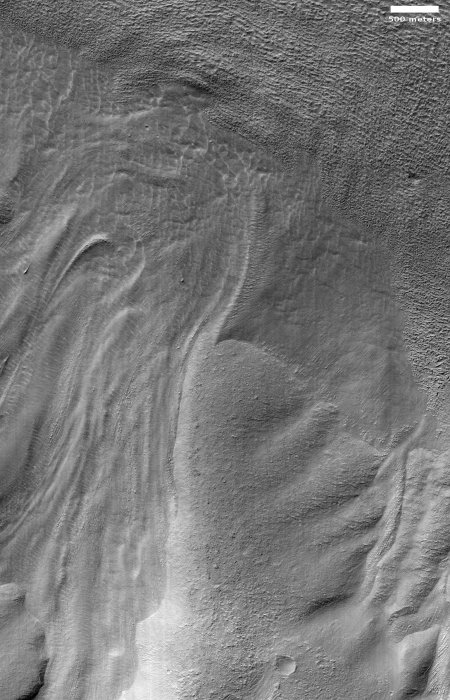 Cool image time! In the recent download of images from the high resolution camera of Mars Reconnaissance Orbiter (MRO), I found the image on the right, rotated, cropped, and reduced to post here. It shows an example of the many glacial flows coming off of the slopes of Euripus Mons, the sixteenth highest mountain on Mars.

We know these are glaciers because data from SHARAD, the ground-penetrating radar instrument MRO, has found significant clean ice below the surface, protected by a debris layer that insulates it. As planetary scientist Alfred McEwen of the Lunar & Planetary Laboratory in Arizona explained to me in a phone interview yesterday,

If you look close, you can see that this particular glacier was made up of multiple flows, with the heads or moraines of each piled up where each flow ended. In addition, this overall glacier appears to have been a major conduit off the mountain, following a gap between more resistant ridges to the east and west.

The sequence of moraines suggest that when the glacier was active, it experienced alternating periods of growth and retreat, with the growth periods being shorter and shorter with time. As a result each new moraine was pushed less distance down the mountain as the previous one.

Euripus Mons is interesting in that it has a very large and distinct apron of material surrounding it, as shown in the overview image below. 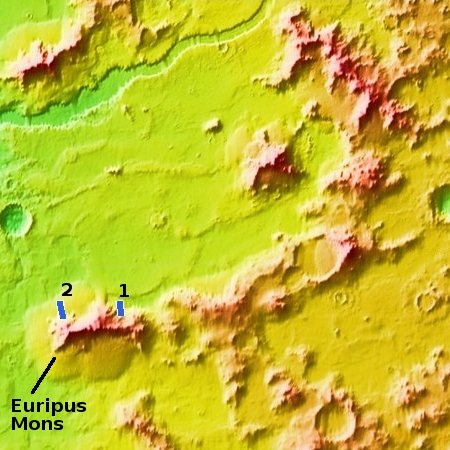 Euripus Mons’ origin is not yet understood. As Alfred McEwen noted, “It is often hard to determine the origin of these mountains. Probably the most common origin are uplifted crater rims or remnants of crater rims. This mountain has kind of an arced shape that makes it a good candidate for a crater rim but it could have been a volcano.”

You can see that arc in the overview image to the right. If this mountain chain was created by an impact, that impact was a very long time ago, allowing it to mostly become obscured with time.

Scientists have had MRO take about a dozen different images of this mountain to better document the glaciers flowing down from it. The overview on the right shows the location of the first image above (#1) as well as another quite spectacular glacial flow posted previously on Behind the Black (#2). As noted in the caption for this earlier image,

These flow-like structures were previously called “lobate debris aprons,” but the Shallow Radar (SHARAD) instrument on MRO has shown that they are actually debris-covered flows of ice, or glaciers. There is no evidence for present-day flow of these glaciers, so they appear to be remnants of past climates. 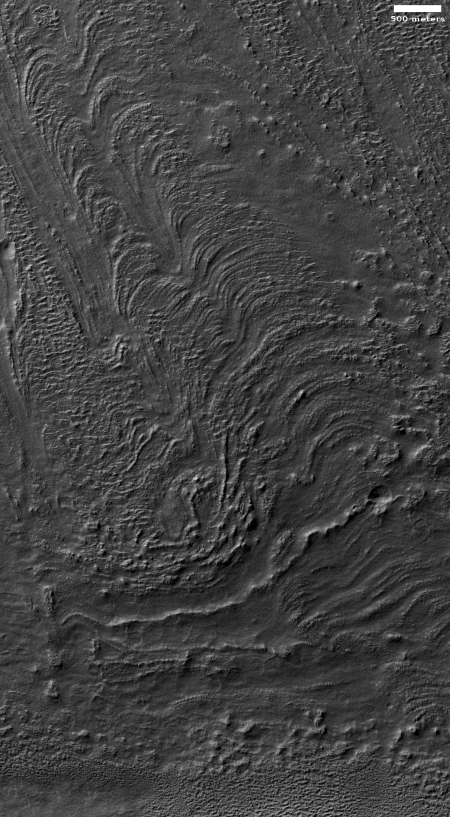 This earlier image is especially “glorious,” as the MRO science team itself labeled it. I have reposted it to the right, rotated, cropped, and reduced, to highlight how glorious it is. You can see that this large apron is the result of repeated flows down from the mountain, with each new flow not quite traveling as far, creating a terraced slope extending many miles.

Unlike the picture to the right, the first photograph above shows a glacier that is not part of that large apron. While the northeast and east end of this mountain does have an apron, it is for some reason much much smaller that the apron at the mountain’s western end.

Euripus Mons is located at about 45 degrees south latitude, which puts in dead center within the southern band between 30 to 60 degrees latitude where scientists have found many buried glaciers.

The glaciers also have surface features that suggest that, though they are not flowing downhill any longer, they are slowing sublimating away over time. This fact fits well with the present theory of the long term climate changes on Mars, whereby Mars is presently in a period where its 25 degree inclination is causing ice in the mid-latitudes to sublimate away and get transferred poleward. At other times, when Mars’ inclination was more tilted, as much as 60 degrees, that process was reversed, with the ice at the poles shrinking to settle in the lower mid-latitudes to form these glaciers. It was at that time that these glaciers were flowing.

Therefore, based on all the known data at hand, this is the long term scenario suggested. When Mars had an extreme inclination, the poles were shrinking, with its water falling as snow in the mid-latitudes. That snowfall would accumulate on mountains like Euripus Mons, producing many glaciers that flowed off the mountain to eventually form the gigantic apron that surrounds it.

As the planet’s tilt was reduced that process slowly stopped, so that the ice at the poles stopped shrinking and the glaciers at mid-latitudes stopped growing. Eventually the process was reversed, so that now the mid-latitude ice is very slowly sublimating away and moving back to the poles.